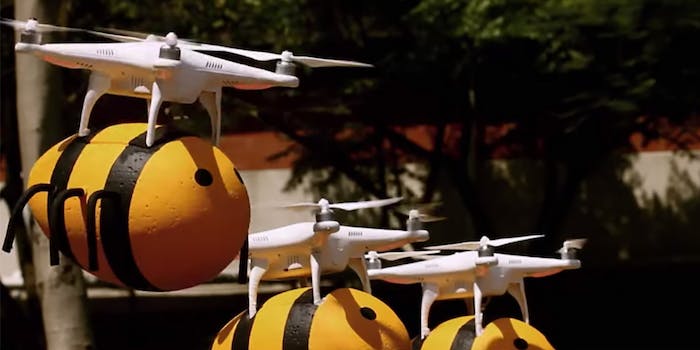 These bee drones deliver honey-flavored beer, because you live in the future

In just the past five years, drones have gone from awe-inspiring sights to, well, kind of boring. Seeing a quadcopter cruising through the sky just isn’t as magical as it once was, but Taiwan Beer’s hilarious delivery drones will definitely still make you smile.

To promote its newly launched honey-flavored beer, the company enlisted the marketing team at Wunderman Taiwan, and the result is a fleet of drones that are both eye catching and adorable.

Each drone is equipped with a styrofoam beer cooler in the shape and dressings of a bumblebee, and customers were allowed to request a drone beer delivery to their offices. Using data from Google Street View, the drones made their deliveries to thousands of happy workers, and the company recorded sales several times that of previous beer launches.