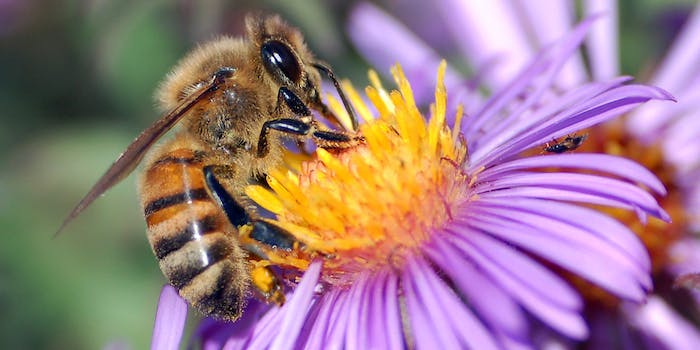 This drone was modeled after honey bee brains

The Internet is buzzing over this video of a drone.

The unmanned aerial vehicle is part of an initiative called The Green Brain Project, in which researchers are attempting to create a drone that acts more like that of the apis persuasion. In other words, they are making drones that are controlled by software modeled off of honey bee brains.

“The team is replicating the honey bee’s wide field of vision with two fish-eye cameras, and mounting chemosensors, which act like ‘electronic noses’ that detect odorants with particular chemical profiles,” Motherboard reported.

According to Green Brain’s website, creating this artificial intelligence will help researchers better understand the honey bee brain. Honey bees, despite having relatively simple brains, are capable of complex cognitive tasks, the team says. They are hopeful their research will both help save the honey bees, and help improve drone technology.

“One of the biggest challenges in the area of UAVs is in developing algorithms that not only have good performance but are also adaptive and robust,” The team writes. “By extending existing models and techniques of honeybees, we plan to demonstrate sophisticated visual-based navigation and cognitive functions in a flying robotic platform.”

In other words, humans are bad at flying so let’s let the bees show us how it’s done.