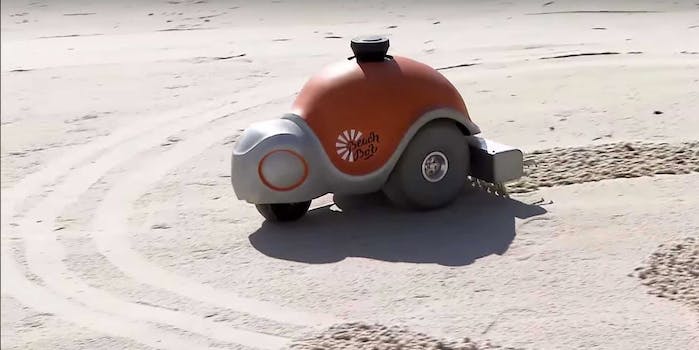 Disney‘s newest lovable creature isn’t animated—instead, it does some drawing of its own.

The Beachbot is the latest creation to roll out of Disney Research, the result of a partnership between the Zurich, Switzerland branch of the lab and students at the engineering university ETH Zurich. It’s an autonomous robot that can create giant pieces of sand art.

The cute little robot has all the makings of a lovable Disney character, albeit one filled with the guts of a machine. Measuring in at just under two feet long and about 16 inches wide and tall, the Beachbot hides three wheels under its shell—two in the back and one in the front that steers. It’s like an artistic version of R2-D2, perhaps the most famous robot in the Disney family.

The Beachbot carries a rake behind it that serves as its brush for painting pictures in the sand. The rake consists of seven individual elements—each run by its own servo motor—that can be used to vary the width of the line and produce different visual effects. The Beachbot can carve a line as thin as two inches or as wide as its entire body.

Wolf Vollprecht, one of the students who helped design the Beachbot, told the Daily Dot that the sand-art idea was inspired by “human sand artists [who] manually draw on beaches, such as Andres Armado.” 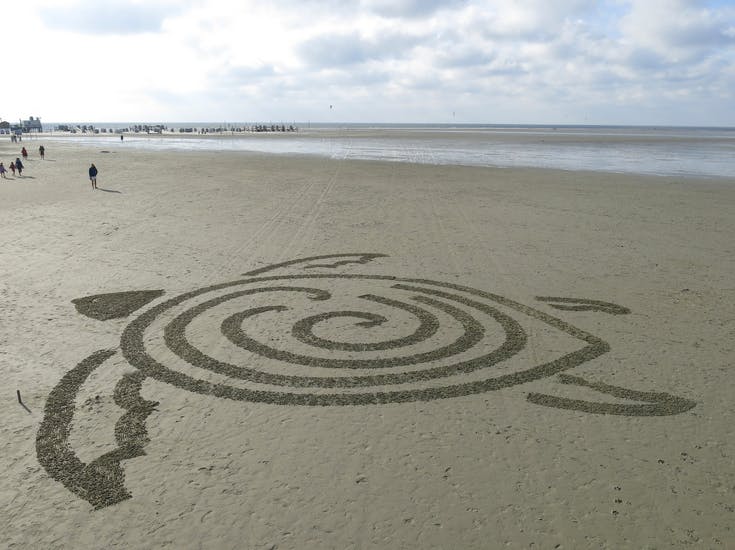 The Beachbot isn’t going freehand when it comes to its sand drawing. The developers can feed it inspiration for what to draw and guide its movements. Vollprecht, who is in charge of path planning on the software team, explained that the team can send pattern information to the Beachbot over a Wi-Fi connection.

A laser scanner mounted atop the turtle-bot helps it localize itself, while reflective poles on the beach create a border to define the field (and keep the robot from accidentally wandering out to sea). With all of the legwork done, “it then draws the drawing fully autonomously in the sand,” Vollprecht explained. “That takes about 20 minutes.”

The Beachbot is living the life most artists can only dream of: hanging out on the beach all day, doing nothing but practicing its craft (granted, all the indie turtle-robots say that Beachbot is a sellout, but what can you do, that’s the artist community). Still, Vollprecht and the design team have big ambitions for the robot.

Their creation is still a prototype, and there are no commercial applications in the works at the moment. But Vollprecht mentioned some possibilities. “We were thinking about snow,” he said, “and crop circles, of course.”

Here’s an elevator pitch for Disney: Remake Signs, but instead of a reveal involving aliens, it’s just Beachbot quietly chugging along, doing its thing. And in another twist, everyone in the movie is generally pretty cool with it because it’s a cute robot. You can have that one for free. You’re welcome.