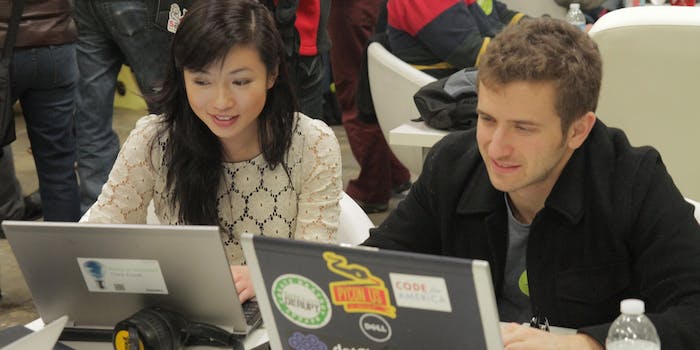 Apparently, Hinge thinks people make career choices based on how bone-worthy their coworkers are.

A lot of people like to complain that swipe-right-swipe-left, image-based dating apps are shallow, but Hinge, a Tinder-inspired dating startup, wants you to know that’s totally untrue. Hinge users don’t just care about looks, guys. They care about other things. Like, for instance, what cool Bay Area tech startup you work at. And how attractive the workforce at said startup is. And… that’s about it, really.

To that end, Hinge has come out with a list of the top 15 most attractive workforces in the Bay Area, which they calculated based on their users’ “favorite-rates” (i.e., the percentage of time someone swipes right on a user’s profile).

The cloud computing company Salesforce comes out on top, closely followed by the investment management company Blackrock and the ride-sharing startup Lyft:

Given the disproportionate representation of women in tech, it’s probably no coincidence that while the list of employers for men predominantly consists of tech startups and investment banking firms, the list of employers for women features some tech startups, but also PR firms and Levi and Sephora, which Hinge helpfully refers to as “lady retail.”

It’s unclear what, exactly, we’re supposed to glean from this list, or why Hinge feels this is necessary information for their users. Are people legitimately using this as a reference point for employment opportunities in the Bay Area? Are single San Franciscans shallow enough to care that much about whether they find the people they work with bone-worthy, or are they just so enamored with tech brand names like Dropbox and Google that they’re just swiping right on everyone who works there? Or is this all just a recruitment tool to get people to work at Salesforce?

Whatever the reason for the list, it doesn’t exactly do much to dispel the notion that dating apps like Hinge are shallow. So cool it with the name-dropping and the hotness-ranking, guys. You’ve accomplished… something.