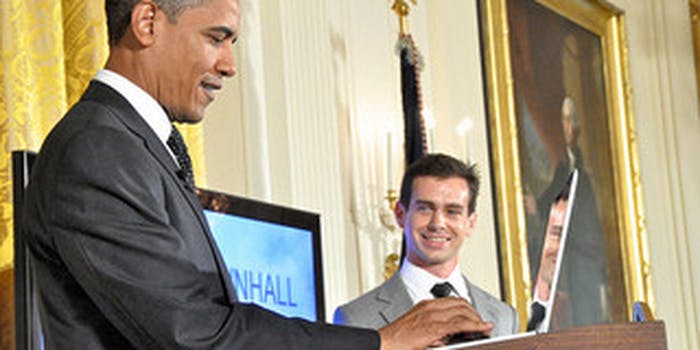 The Obama administration is outsourcing the president's tweets.

When a celebrity or politician runs their own Twitter account, it’s usually obvious. Kanye West’s all-caps, emphatic tweets come in spurts and are clearly authored by the artist. Ashton Kutcher’s Joe Paterno gaffe would’ve never been typed by PR types. But for every loose-thumbed actor, there’s another celebrity or politician hiring ghostwriters and social media staffers to help them polish their tweet game.

The Twitter account verified as @BarackObama often tweets impersonal political messages, but it includes enough seemingly off-the-cuff updates to give an impression that the president is, at least, telling someone what to say:. For instance, a recent tweet referenced the Netflix hit House of Cards, implying that the president is eager to watch Kevin Spacey ham his way through a political drama.

As Philip Bump explained for the Wire, the @BarackObama account, despite its occasionally conversational style and blue verification checkmark, is not the work of President Obama at all. The man who holds the highest public office in the United States is not hashtagging from his iPhone (unless he has a secret account no one knows about). The @BarackObama account, which has more than 41.5 million followers, is run by a nonprofit called Organizing for Action. OFA ran Obama’s 2012 presidential campaign, and it continues to run this Twitter account. The OFA staff also runs Michelle Obama’s Twitter account, which has more than 5.35 million followers.

OFA told Bump that people shouldn’t be confused because the account’s Twitter bio clearly states that only tweets signed -bo are directly from the president. But as Bump pointed out, none of the tweets from the past four months have that sign-off. And many of the heavily retweeted posts can easily be confused with a direct endorsement from the president.

For instance, when NFL football player Mike Sam came out as gay, the OFA staff sent out this tweet:

It’s very clear from the retweets that many people think this is something written by the president:

52 gets a shoutout from the President. RT @BarackObama Congratulations on leading the way, @MikeSamFootball. That’s real sportsmanship.

@BarackObama Pathetic @MikeSamFootball is priority for you as POTUS.

One would assume that the White House would be concerned that the group in charge of the president’s official Twitter account is tweeting without vetting the language with the White House press secretary. The OFA worked closely with Obama on his campaigns, but who exactly is coming up with these tweets, and how well do they know the president? When it comes to politically incendiary tweets like the Mike Sam congrats, is there dialogue with Obama about how the language should be used? And does anyone at OFA know for certain that the 44th president of the United States is anti-spoiler?

Now, the OFA isn’t just any nonprofit. “OFA” used to stand for “Obama for America.” It’s essentially Obama’s campaign team rebranded. So chances are, the people tweeting do know Obama’s personal preferences and opinions well enough to convincingly emulate his Twitter voice. And chances are, they do vet these tweets with the president. But if they are actually consulting the White House, why can’t they be more transparent about who is writing these tweets—or just get the president to occasionally offer a remark to use on Twitter, instead of inventing them? It seems disingenuous to note that there will be tweets signed -bo when the handle has tweeted thousands of times since the last post marked this way. And why is the White House downplaying the connection between the OFA’s @BarackObama Twitter handle and the president?

It’s bizarre and misleading that the verified @BarackObama Twitter account is run by a nonprofit, despite the disclaimer in the Twitter bio (which many people never check, instead assuming that this seemingly official account is legit when they see others retweet it). I assume the reason the White House decided this is the best course of action is because the technology apparatus the Obama campaign assembled is already advanced and established. But this Twitter outsourcing makes the Administration look bad. Of course, the President will have someone helping him tweet, but if it’s an official account, he should at least be directly involved in some way.

The Daily Dot reached out to Organizing for Action for some answers, but the organization has yet to respond. Perhaps it’s too busy trying to figure out how Obama feels about Orange Is The New Black.