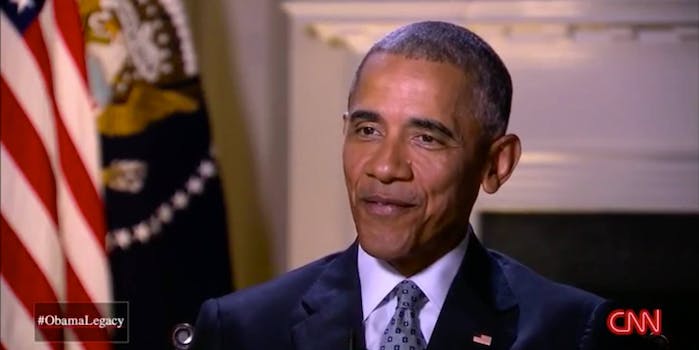 President Obama says he ‘absolutely’ faced racism while in office

There's one area of the country where it's been the worst.

On Wednesday night CNN aired “The Legacy of Obama,” a two-hour special by host Fareed Zakaria. In an interview with Zakaria for the special, President Barack Obama opened up about the country’s racial tensions, saying that he “absolutely” felt some of America’s concerns with his presidency were race-based.

President Obama doesn’t see racism in mainstream opposition to him, but he does see it on the fringes: Exploring #Obamalegacy now on CNN

“Attitudes about my presidency among whites in northern states are very different from whites in southern states,” Obama told Zakaria in a clip featured on CNN’s Twitter account.

“Are there folks whose primary concern about me has been that I seem foreign? The other? Are those who champion the birther movement feeding off of bias? Absolutely,” Obama continued.

The clip goes on to discuss how the largest proponent of the birther movement, Donald Trump, is now president-elect of the United States.

.@POTUS to @FareedZakaria in #ObamaLegacy: Are there people whose primary concern is that I seem foreign? Absolutely https://t.co/VLBUR6m6es

In related news, the sun rose today, the sky is blue, water is wet…