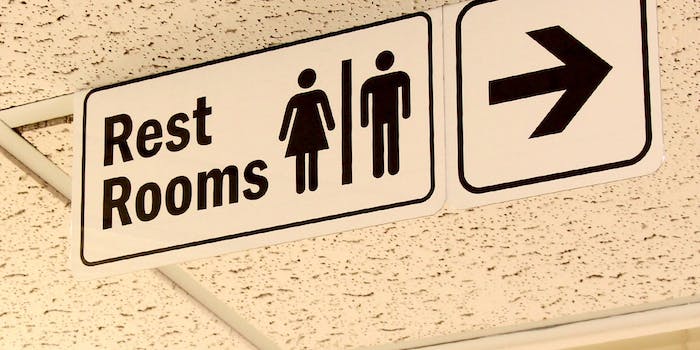 This is a win for LGBT advocates.

With the U.S. Department of Justice suing the state of North Carolina for passing a law that denies rights for transgender people, President Barack Obama on Friday will make it explicitly clear what he thinks of transgender rights.

According to the New York Times, the Obama administration will issue a directive telling all the country’s public school districts they must allow transgender students to use the bathroom that corresponds to their gender identity.

That’s exactly what North Carolina was trying to avoid when it passed House Bill 2, otherwise known as the “bathroom bill,” in March, sparking a national outrage among LGBT advocacy and civil rights groups.

The Times reports that the administration will send a letter, signed by officials from the Justice and Education departments, to every school district on Friday, making sure no transgender students face discrimination. As the newspaper notes, “It does not have the force of law, but it contains an implicit threat: Schools that do not abide by the Obama administration’s interpretation of the law could face lawsuits or a loss of federal aid.”

Some celebrated the news.

Said Human Rights Campaign President Chad Griffin in a statement: “These groundbreaking guidelines not only underscore the Obama administration’s position that discriminating against transgender students is flat-out against the law, but they provide public school districts with needed and specific guidance guaranteeing that transgender students should be using facilities consistent with their gender identity. This is a truly significant moment not only for transgender young people but for all young people, sending a message that every student deserves to be treated fairly and supported by their teachers and schools.”

Others, such as Missouri’s lieutenant governor who’s also running for governor, weren’t such big fans.

ENOUGH IS ENOUGH! Tomorrow Obama takes control of the restroom in your child's school. As Gov, I'll fight back. https://t.co/VM04Q4NnwD

North Carolina Gov. Pat McCrory also probably won’t like the decision. After the Justice Department sent his state letters alleging that HB2 violated the Civil Rights Act of 1964, McCrory sued the federal government, saying, “The department contends that North Carolina’s common sense privacy policy constitutes a pattern or practice of discriminating against transgender employees in the terms and conditions of their employment because it does not give employees an unfettered right to use the bathroom or changing facility of their choice based on gender identity. The department’s position is a baseless and blatant overreach.”

On Thursday, the Massachusetts Senate passed a law that protects transgender people from discrimination. The Obama administration wants to make sure students in the rest of the 49 states can be protected in the same way.

“No student should ever have to go through the experience of feeling unwelcome at school or on a college campus,” John B. King Jr., the secretary of the Department of Education, said in a statement. “We must ensure that our young people know that whoever they are or wherever they come from, they have the opportunity to get a great education in an environment free from discrimination, harassment, and violence.”