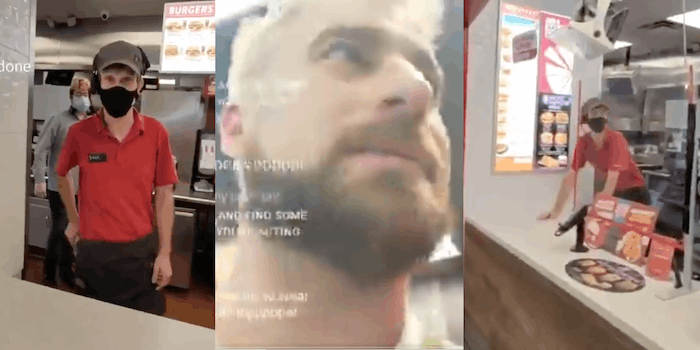 'Is that supposed to scare me?'

White nationalist Tim Gionet, known online as “Baked Alaska,” recently live-streamed himself harassing employees at a Jack in the Box over the restaurant’s mask policy.

In footage uploaded to Twitter on Friday, Gionet, who is currently out on bail after being arrested in late January for his alleged participation in the Capitol riot, can be seen arguing with the store’s staff while refusing to cover his face.

Gionet repeatedly asks to use the businesses’ bathroom despite an employee insisting that he must leave the building.

“I just need to use the bathroom, dude,” Gionet says.

After being told yet again that masks are required inside the store, Gionet erupts on the fast-food worker in a profanity-laced tirade.

“Dude, they’re not wearing masks in the White House, you fucking r*tard. Have you not seen?” Gionet says. “Joe Biden’s not wearing a mask. He’s the biggest cuck in the world. You’re a cuck, bro!”

Even as the employee threatens to call the police, Gionet continues to throw his fit.

“Is that supposed to scare me?” Gionet repeatedly shouts.

Shortly after, Gionet finally decides to leave, but not before throwing a homophobic slur at the employee.

Throughout the interaction, a majority of Gionet’s followers can be seen praising his actions in the video’s comments. The comment section is also filled with numerous antisemitic remarks.

Gionet in January live-streamed himself rummaging through several rooms in the Capitol, including that of House Speaker Nancy Pelosi (D-Calif.), after supporters of former President Donald Trump attempted to stop Congress from certifying the results of the 2020 presidential election.