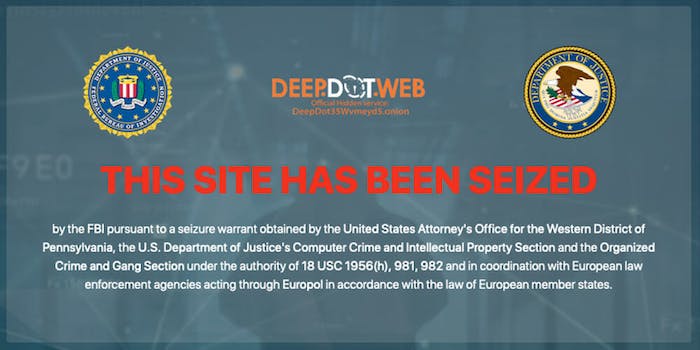 Site accused of generating millions of dollars by referring users to drug markets.

DeepDotWeb, a popular website that linked users to dark web drug markets, has been taken down by the FBI.

A banner on DeepDotWeb’s homepage Tuesday states that the site has been seized as part of a multinational operation involving European law enforcement agencies.

DeepDotWeb is accused of generating millions of dollars by referring users to specific dark web markets. Those marketplaces, which sell everything from drugs to hacked data, are hosted on the Tor Network.

The seizure of DeepDotWeb comes just days after the dark web’s leading marketplace, Wall Street Market, was similarly taken down by law enforcement. The U.S. Department of Justice has stated that Wall Street Market sold illegal goods to roughly “1.15 million customers around the world.”

The FBI thus far has not commented on the DeepDotWeb case but is expected to unseal the charges Wednesday, TechCrunch reports.