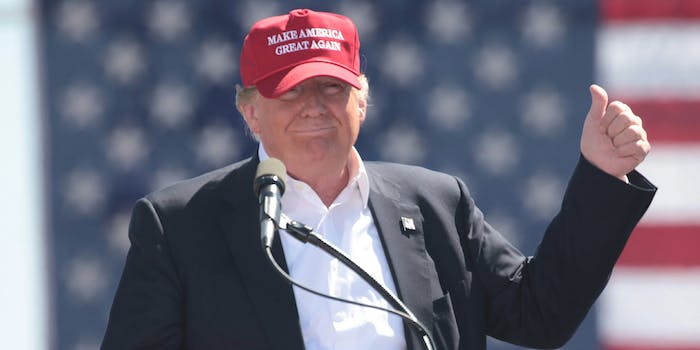 The lawsuit is expected to be announced on Monday afternoon.

Two U.S. attorneys general plan on filing a lawsuit against President Donald Trump, alleging that foreign payments to his businesses violate the Constitution.

The suit, brought on by attorneys general from Maryland and the District of Columbia is similar to a lawsuit filed by Citizens for Responsibility and Ethics in Washington, an ethics watchdog group, which alleges that Trump is violating the “Emoluments Clause.”

The Department of Justice filed a brief on Friday arguing that the Citizens for Responsibility and Ethics in Washington lawsuit be dismissed.

DC and MD attorneys general scheduled to announce a "major lawsuit" against Trump on Monday pic.twitter.com/UDaJOqEr4k

The emoluments clause says that no person holding office can accept any “present, emolument, office or title of any kind whatever, from any King, Prince, of foreign state.”

The suit from Maryland and D.C. would also focus on the emoluments clause and Trump’s hotel empire, ABC News reported.

Specifically, the suit alleges that Trump chose to retain ownership of his company when he became president, according to the Washington Post.

While Trump announced in January that he would be putting his financial assets in a trust to be managed by his sons, D.C. Attorney General Karl Racine and Maryland Attorney General Brian Frosh said Trump continues to receive regular updates on his company’s financial well-being.

If the case proceeds, the attorneys general would likely seek copies of Trump’s personal tax returns to look at possible foreign money interests, the newspaper reported.

“This case is, at its core, about the right of Marylanders, residents of the District of Columbia and all Americans to have honest government,” Frosh told the Washington Post. “We’ll need to see his financial records, his taxes that he has refused to release.”