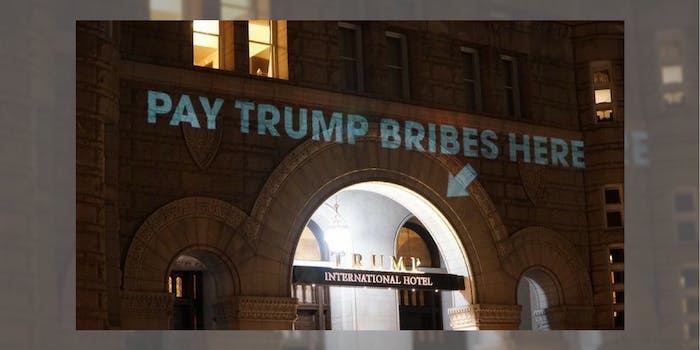 Someone's got a message for the 45th president.

For about 10 minutes on Monday night, people (or institutions) looking to bribe President Donald Trump needed to look no further than the president’s namesake upon the Washington, D.C., Trump International Hotel.

Around 9:15pm ET last night, multimedia artist Robin Bell projected his light show onto the entrance of the hotel at 1100 Pennsylvania Ave., less than a mile away from the White House, with the messages, “Pay Trump Bribes Here,” “Emoluments Welcome,” and the full Emoluments Clause of the Constitution.

The Emoluments Clause was written specifically to prevent U.S. officials from accepting money from a foreign state. Within the first week of his presidency, Trump was slapped with a lawsuit by a group of prominent ethics attorneys alleging that Trump actively violated the clause by collecting revenue from the Trump Organization, which owns hotels frequented by officials from foreign governments.

The Trump Organization’s lease on the Washington Trump International Hotel, which it leases from the federal government, expressly prohibits elected officials from having a stake in the property. At the time of the lawsuit, Trump had yet to divest from the company nor the building.

Had a lot of fun projecting #emolumentswelcome on Trump hotel pic.twitter.com/FlFr2ITJtj

Though up but for a brief moment in the late hours of Monday, Bell’s projected light show caught the attention of communities on Reddit and Twitter, with an image of the “Trump Bribes” message receiving more than 100,000 upvotes on the former platform in the 10 hours since its posting.

Bell told the Daily Mail that he began his political projection artistry during the Occupy Wall Street movement. And he’s created other projection artwork against the 45th president’s administration, including a message reading, “Experts agree: Trump is a pig,” projected onto the same hotel, and another protesting the appointment of Environmental Protection Agency Administrator Scott Pruitt onto the EPA building.

Robin Bell is leading D.C.'s art protests through light projections. Here are some others: https://t.co/ZjWyTLy1RI pic.twitter.com/GtGGKHJL9n

“Something like the emoluments can be a tough concept, so whatever I can do to make it more accessible—it’s even better if it’s funny,” Bell told the Daily Mail. “I would hope that five or 10 years from now, people outside the country can look at this and have it serve as a visual cue that not all of America is on board with what’s going on.”

“I’m really happy about what happened tonight because it’s kinda depressing right now,” Bell said. “We need as much visual, positive reinforcement, as we can.”