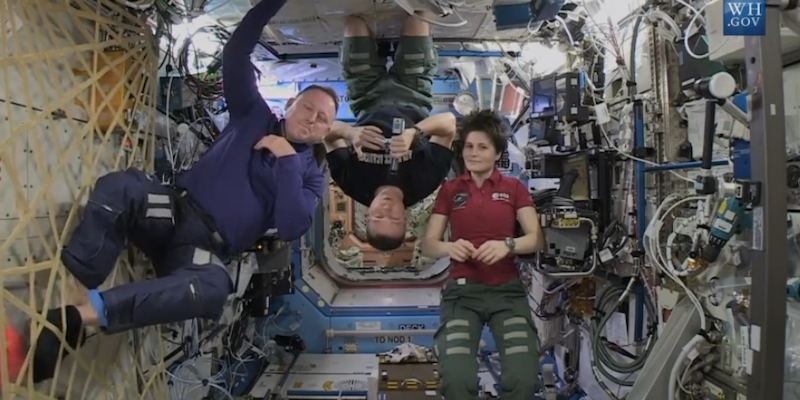 The State of STEM seems promising, if these students are any indication of the future.

Following President Obama’s State of the Union address on Tuesday evening, the White House hosted the State of Science, Technology, Engineering and Math (SoSTEM), where astronauts and scientists talked about how STEM education is important for future careers in the U.S.

A roomful of excited students of all ages listened to the speakers, asked a few questions of astronauts floating in space, and heard from a panel full of female scientists who described research happening both on Earth and in space.

Obama briefly mentioned STEM education during Tuesday’s State of the Union, noting that the U.S. is at an all-time high as far as science and technology math scores. Obama also touted the need to pursue space research and eventually create technologies that can do things like turn sunlight into fuel and help us colonize other planets. All of which, of course, can’t be achieved without students passionate about STEM.

The president himself has even learned to code. In December, Obama became the first president to learn to code, and he joined students for the Hour of Code during Computer Science Education Week in an effort to inspire students’ interest in programming.

At Wednesday’s event, Megan Smith, chief technology officer of the U.S., kicked off the event by describing how STEM is often challenging, but just as people to learn to read by first learning the alphabet, science, technology, and engineering projects start with a small first step. Smith also touched on the inaccurate portrayals of computer scientists in the media, who are often white and male.

That’s not the case, she said. Anyone can be a computer scientist, or engineer, or astronaut.

To illustrate the opportunities of STEM careers, astronauts from the International Space Station joined the event via videoconference, and a handful of students got the opportunity to ask them questions, ranging from queries about 3D printing to the most beautiful things they get to see in space.

We’ve compiled some of the questions the students asked, and edited responses from the astronauts. The questions served as a reminder of the abundant curiosity of young students and the idea that, when given the opportunity, students are not only interested in STEM but excited about the careers they know they can have in the future. 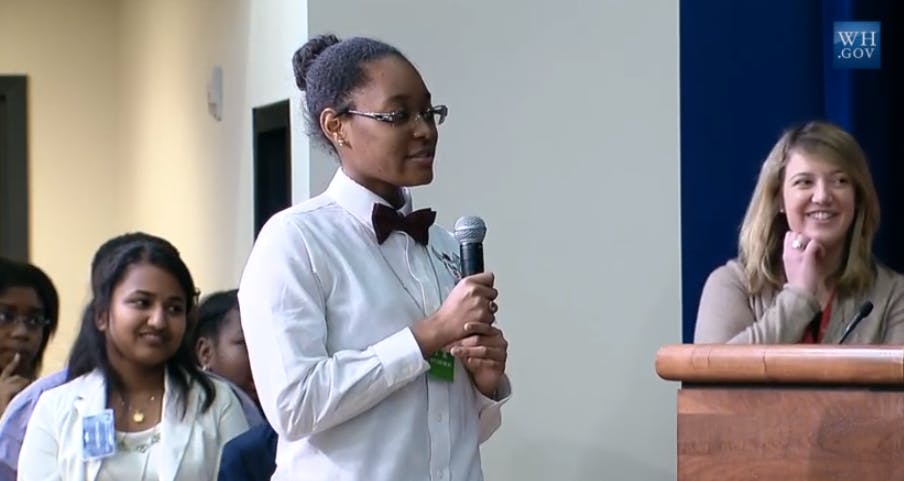 Is life in space hard or is it easy?

Captain Wilmore: It depends on what you’re doing. It’s a great environment—there is no up or down. It is a fabulous time, and it’s a lot of fun.

What is your favorite thing in space?

Colonel Virts: As you can see, it’s so cool floating.

What did you do to become an astronaut?

Captain Cristoforetti: There’s different paths. Some astronauts are military pilots. Some are scientists, engineers, from mixed backgrounds, are pilots, but also have backgrounds in science and engineering. There are some doctors among our fellow astronauts. [To become an astronaut, you need to] work hard in school, and it’s really important to choose a career—before you become an astronaut—that you really love.

How do you move around in an anti-gravity environment?

Colonel Virts: You learn how to do it, and learn to do it quick. You’re weightless—it takes a little getting used to. You have to move very slowly at first, and control how much pushing and pulling you do. It’s really fun and it’s something humans can really learn and adapt to.

I heard you 3D-printed tool, how is that going? Did you use it?

Captain Wilmore: We’ve 3D-printed several things. The 3D printer has now been stashed away, and all the things we printed are going to be bagged up. [We printed things like wrenches], but they wouldn’t let us use them. The materials are headed back to Earth on the Dragon Spacecraft in February.

What’s it like being in a space suit when you’re outside of your ship?

Captain Wilmore: When you get in one of the space-walking suits, you get into a spaceship. It’s got all the life support and oxygen you need, and it circulates cool water. We don’t have any food, so you can only stay for certain lengths of time. The view through the visor is so clear and just the thought that when you’re outside, you think about how you’re the only two people in the universe doing something like that at that moment.

What intimidated you the most and how did you overcome that fear?

Captain Wilmore (discussing a spacewalk taken by two colleagues): When I suited them up and got them ready, it was the most stressful thing I’ve done. Their lives were literally in my hands.

Was this a job you wanted ever since you were a kid?

Captain Cristoforetti: When I was very young in elementary school, I already told adults and teachers that when I grew up, I wanted to go to space.

What’s the first thing you’ll do when you get back to Earth?

Colonel Virts: The first thing I’ll do is shower when I finally get to shower.

What kind of research are you doing?

Colonel Virts: A cargo vehicle arrived with a lot of science on board. We’re studying material science right now, how [scientists] measure materials and how they cool and become coarse, and how the molecules in the liquids change as they solidify. Butch grew some plants, and Samantha is working with fruitflies.

What do you do for fun to pass the time in space?

Captain Cristoforetti: Last night we were hunting for Comet Lovejoy. I like finding places on Earth that have special significance or speak to me because of their geography. It’s incredible beauty, ever-changing technology.