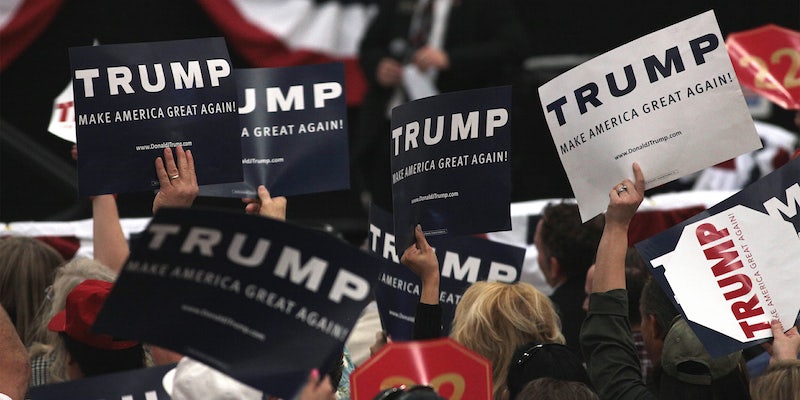 Amid the chaos and division that has paralyzed American politics, one community of Trump supporters is striving to cut through the insults, petty memes, and misconceptions hurled left and right.

This collective of conservatives, all users on social news site Reddit, run the subreddit Ask Trump Supporters to connect with critics and “facilitate discussion.”

With eight moderators, including a non-supporter of Trump, the subreddit aims to exist as “neutral ground” where every comment is “moderated equally, and everyone with an open mind who participates in good faith is welcome.”

“This subreddit is about bridging that gap that has been formed by our media and getting to better know each other,” the subreddit’s wiki reads. “How do you get to know someone better? Ask questions. Ask yourself why you hold that view of Trump supporters or non-supporters. Respectfully ask the other person how they came to those conclusions.”

Recent popular threads relate to Trump’s retweet of a CNN meme and his visit to Europe to meet with other world leaders for the G20 conference.

It all sounds, well, quite open-minded. “Non-supporters” of the president—who are identified by “flair” saying as much next to their usernames—are actively encouraged to engage and question the social perspectives and political motivations of those who do support Trump, known on the subreddit as “Nimble Navigators.” It’s an initiative that is simply not happening elsewhere.

To make it happen, however, moderators enforce a number of rules. These are aimed at maintaining a space for civil, honest, and thoughtful conversation. One pointed requirement, for example, is that all comments must be clarifying questions in “an effort to better understand the answers given by Trump supporters.” Moderators actively remove posts they deem to0 argumentative or leading questions.

On top of this, the moderators emphasize what they call “posting in good faith” and require this standard be upheld by both pro-Trump redditors and non-supporters.

It is, in many ways, the exact opposite of the popular, hyper-pro-Trump subreddit, The_Donald, where non-supporters are banned and liberals are constantly mocked.

“We have this rule to keep the communication open…” the moderators explain. “Not posting in good faith is when a user is not engaging in thoughtful discussion, and instead is hostile or extremely biased to other’s viewpoints, to the detriment of discussion.”

In this respect, it is alternative in culture and moderation standard, despite being part of and endorsing a broader pro-Trump network that includes The_Donald and AskThe_Donald.

The notorious and often politically incorrect The_Donald is the biggest community of Trump supporters on the website and serves as an incubator for much of the pro-Trump hype online, with nearly half a million subscribers. It has made headlines several times for its memes and trolling. Members of the The_Donald have also engaged in vast crowdsourced investigations into the Democratic National Committee email dump by WikiLeaks during the run up to the 2016 presidential election, and set out to prove a conspiracy theory involving murdered Democrat staffer Seth Rich.

The_Donald moderators manage their own question and answer subreddit called AskThe_Donald. It focuses more on policy conversations than The_Donald but remains insular and designed to serve Trump supporters and suppress differing opinions. Users have complained openly about the “extremely ban-happy” moderators there.

Although originally established by The_Donald moderators, who during the pre-election period pointed their users there, AskTrumpSupporters eventually broke away and revamped its rules. A quick scroll through either of these subreddits shows just how different the mission of AskTrumpSupporters now is.

“Our goal isn’t to promote an echo chamber,” one moderator tells the Daily Dot, “but to combat misconceptions by media and 80 percent of Reddit.”

Motivated by the desire to be objectively understood and listened to, the rules around interaction work to displace the noise and ridicule that has come to dictate political discourse. In implementing it, moderators have been forced to not only disarm the quick judgement of the left but confront the limitations of rabid right-wing “shitposting.”

Doing so has led to conflicts with other pro-Trump moderator circles and it being dropped from promotion on The_Donald’s banner. The community has also been accused by The_Donald diehards of being loaded with “CTR shills”—Democratic supporters paid to spam pro-Trump online communities with liberal propaganda—because of the neutrality of the comments.

Reddit drama might be way inside baseball, but it’s indicative of what it often costs to reach across the table in a culture of hyper-partisanship.

Boasting a subscriber count of over 30,000 users, however, an appetite for conversation across the political divide quietly grows. And in this small corner of the internet, it’s been instigated by the president’s supporters.