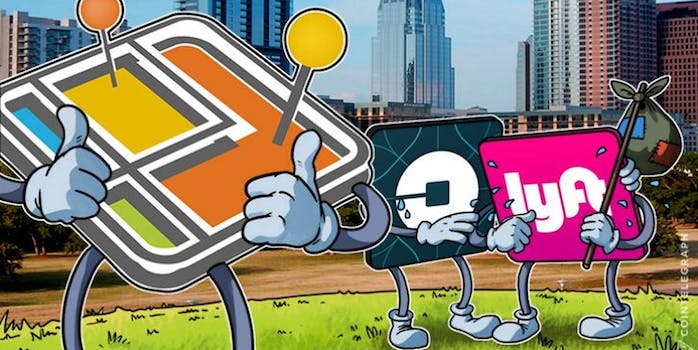 But it's threatening legal action.

Austin local Cheri Hawes was facing roughly $1,220 in fines after a casual drive across town. She’d given two strangers a lift Friday night and accepted $20 for her trouble.

They were undercover police officers, and her solo ride-hailing operation was a no-no.

Hawes is one of thousands of Central Texas residents who turned to Arcade City, an “open marketplace for peer-to-peer” ride-hailing, that moved in from Portsmouth, New Hampshire, as Uber and Lyft halted Austin operations following the May defeat of Proposition 1.

Proposition 1 was a ballot measure that would have allowed Transportation Networking Companies (TNCs) to operate in the Texas capital without conducting fingerprint-based background checks on drivers. Travis County (the county that encompasses Austin) election results showed that only 44.29 percent of voters elected to adopt the ordinance.

But Arcade City said that it doesn’t break the city of Austin’s laws because it is not a TNC and it only exists within Facebook. That’s true: Users post to the Facebook group—which currently boasts more than 30,000 members—with requests for a ride. Then drivers respond and message details like addresses and credentials.

Hawes was a victim of a recent sting operation conducted by the city, wherein law enforcement went undercover, requested rides, and then ticketed drivers for not having a valid chauffeur’s permit and for not having operating authority. They also impounded Hawes’s car when they arrived to their destination.

“A person with a fake Facebook profile posted in our group on Friday asking for a ride and one of our experienced drivers jumped on it and went to pick up these two guys and then went to the drop-off spot,” Christopher David, CEO of Arcade City, told the Daily Dot.

David said that once Hawes was paid $20 by her riders, two police cars pulled up behind her.

“One officer came up and grilled her about unregulated rides,” David said. “He wrote her up a ticket and then she said they acted like she was going to be able to go but then this other officer informed her that her vehicle would be impounded. She begged them and said that she’s got two daughters to support and her vehicle is her only method of paying the bills and she wouldn’t be able to afford the fees or fines of getting it impounded.”

Despite protest, Hawes’s vehicle was impounded. In response, Arcade City Facebook group members crowdfunded the $220 she owed the city and David said she was able to get her car back within an hour. The corporate side of Arcade City paid her citation fees.

Marissa Monroy, public information and marketing manager for the city of Austin’s transportation department, told the Daily Dot in a statement that the city encourages “users to look for services that fully vet their drivers.” The full statement follows:

We highly encourage users to look for services that fully vet their drivers and have mechanisms in place to ensure the safety of both the riders and the drivers. The City of Austin will continue to enforce the City Code.

In response to the sting operation, Arcade City is threatening to sue the city. David said Arcade City takes issue with two aspects of the sting: The citation lists “Arcade” as Hawes’s employer, and the city showed that it views Arcade City as a TNC.

“First of all, there’s not an entity named ‘Arcade’ but we assume they meant ‘Arcade City.’ We’re not her employer, she’s not a contractor, there’s nothing there,” David said. “More broadly than that, if the city is going to be coming after us as if we are a TNC—which judging by last night’s stories, they view us as a TNC—there’s going to be some interesting legal action that’s coming out of this.”

Austin’s city code defines a TNC as an “organization whether a corporation, partnership, sole proprietor, or other form, that provides on-demand transportation services for compensation using an online-enabled application (app) or platform to connect passengers with drivers.”

David said that Arcade City cannot be considered a TNC because it does not vet or maintain a group of employed drivers. Currently Arcade City is not making money from the Facebook group. David said it raised investment funds to get going but when the app launches his company will take 10 percent of profit made from rides through the app.

“Our understanding is that we cross the line from not being a TNC to being a TNC as soon as we are maintaining a fleet of drivers that are being specifically vetted and directed by us,” David said. “We’re saying that we’re structured like Craigslist, an open marketplace. Instead of the daddy corporation vetting the drivers, we want the community vetting the drivers.”

Initially, Arcade City had planned to release its official app this week and roll out a “leveling system” that is a “reputation and rating system that provides clear and trusted information to both parties in a peer-to-peer transaction,” according to the corporation. The app and system would have been available to Arcade City’s top 150 drivers and riders.

However, since the sting, Arcade City has opted to postpone the app launch in order to focus solely on the leveling system.

“As a result of this sting and the need to harden our network against both outside infiltrators and bad actors, we’re going to be rolling our leveling system as soon as possible for the entire network,” David said. “We’re going to prioritize that and then push the app itself launch back about a week.”

At press time, Hawes was not immediately available for comment.

On Tuesday David released an official statement video that cautioned the city that if it continued to target Arcade City, the organization would sue.

“Please get out of our way,” David said in the statement. “Let us clean up your mess, and we’ll be good.”

Correction: Arcade City is based in Portsmouth, New Hampshire.