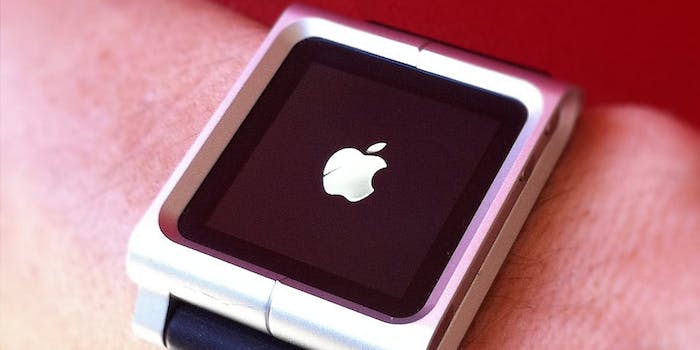 How the ‘original’ Apple watch compares to the real thing

Apple predicted the smartwatch a long time ago. The release of the sixth generation iPod Nano in 2010 gave users a very small taste of what it was like to have a smart device on your wrist, and now that the official Apple Watch is just weeks from availability, it’s perfect timing to see how far the design has really come.

The sixth generation iPod Nano wasn’t designed specifically as a watch, but since the tiny device came with a variety of watchfaces built right in, it wasn’t long before third-party accessory makers jumped at the opportunity to turn it into the first iWatch. The Apple Watch, of course, is designed to be exactly what its name suggests, which means it should be more suited to everyday usage scenarios than its less powerful predecessor.

But that isn’t entirely true.

These are the features that both the iPod Nano 6G and the Apple Watch share:

That’s not even counting the Mickey Mouse watchface. It’s a pretty impressive list for the out-of-production, five-year-old Nano. Of course, the Apple watch can do a few things the iPod Nano can’t, and they are significant:

But the Nano does a few things better than its update.

It’s a little astounding how closely the feature lists between the two devices remain, especially if things like Apple Pay and ResearchKit don’t interest you.

Is the iPod Nano a hard sell compared to the Apple Watch? Yes. But… not hard enough.