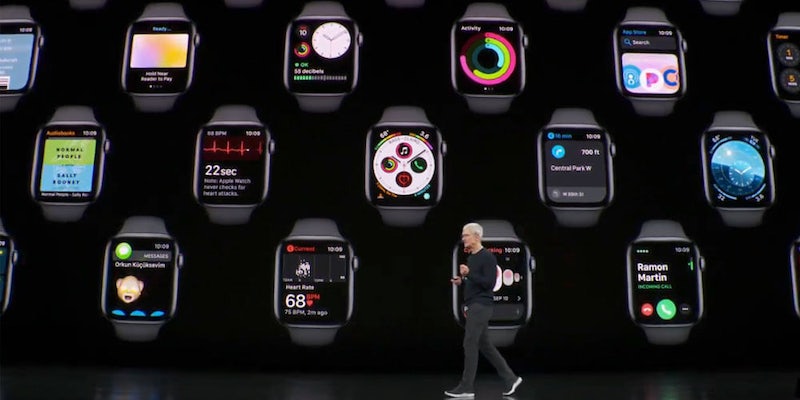 Everything you need to know about the Apple Watch Series 5

A new 'Always-On Retina display' means you no longer have to move your wrist to see the time.

On Tuesday during its iPhone event, Apple revealed the next iteration of its smartwatch, the Apple Watch Series 5.

Available for pre-order today, the new watch will be available in stores across the country on Sept. 20th. Here’s everything you need to know about the Apple Watch Series 5.

Among its new features, the new Apple Watch includes an “Always-On Retina display” that will allow users to check the time without needing to move their wrist. The watch face will simply dim when not in use and automatically increase its brightness when needed.

Despite the new display function, Apple is promising that the watch will still have the same 18-hour battery life as the previous model. That battery life is made possible due to a new polysilicone and oxide display that operates at low temperatures as well as a low-power display driver.

Users will also be able to pick what material they want their watch made from, including recycled aluminum, stainless steel, titanium, or ceramic. A wide array of watch bands can also be chosen from the Apple Watch Studio, and there are a variety of new colors, prints, and materials to choose from.

As expected, the app will include numerous health-related features that will let users monitor everything from their heart rates to menstrual cycles.

The watch can even detect the decibels in your environment to warn you if your hearing could be impacted by loud noises.

The Series 5 will also have a new compass, and emergency calling for international countries has been added and will be accessible even for watches that don’t have cellular service.

The Apple Watch Series 5 model will come in at $399 for the GPS-only version while the LTE cellular version will cost $499. If that’s too rich for your blood, Apple also announced that its Series 3 watch will now only cost $199.