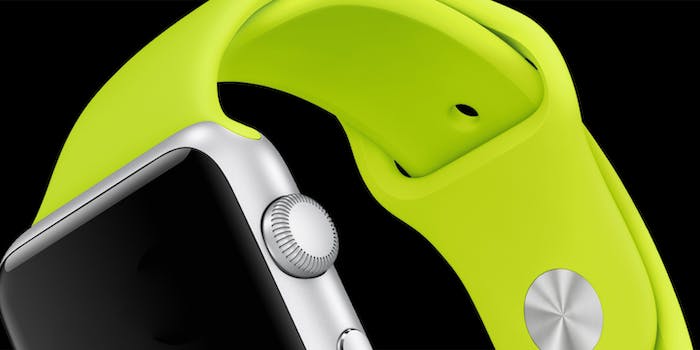 The Apple Watch finally has a release date

Apple‘s first entry into the smartwatch market will be available for pre-order on April 10, with shipping starting on April 24, the company just revealed at its Spring Forward event in San Francisco, Calif. Pricing for Apple Watch starts at $349, which will get you the smaller 38 mm Apple Watch Sport with the rubberized band, while the larger 42 mm version will set you back $399.

For those with rich blood, the yellow and rose gold versions are priced starting at $10,000, and will be available in extremely limited quantities to start.

Apple CEO Tim Cook showed off a new “Glances” feature today that lets you instantly swipe between a variety of screens such as your heart rate, weather, and other need-to-know info. The messaging and email features were also on display, looking a lot like they do on the iPhone, only a bit smaller.

The Apple Watch app will arrive on iPhone with iOS 8.2, and it’ll serve as the one-stop shop for Apple apps. This new iOS update is on its way today as well, though hasn’t yet arrived.

On the topic of battery life, Tim Cook noted that the watch will feature 18-hour battery life. “I think that works for most people,” he noted, calling it “all-day battery life.”

Apple also offers a whole suite of different swappable watch bands to suit pretty much every taste. There’s a leather strap that is available in a variety of colors, a decorative buckle clasp, a stainless steel chain link band, and a rubber sport band that you won’t mind sweating on.