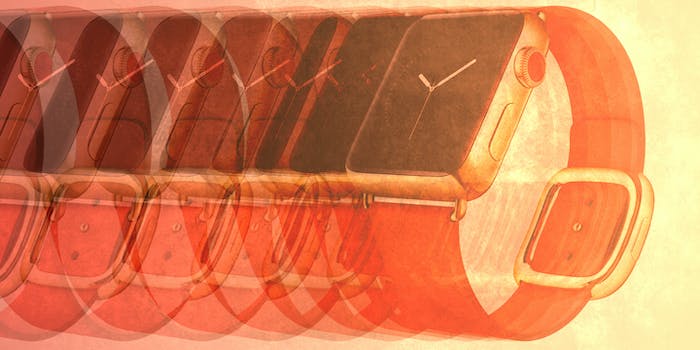 An Apple Watch can’t change the world, but its price tag could

At Apple’s event in San Francisco on Monday, supermodel and humanitarian Christy Turlington Burns took the stage to show off the Apple Watch’s fitness capabilities that apparently helped her run and keep track of a recent half-marathon.

Turlington Burns was the first woman on stage at an Apple event in quite some time. Many people were expecting Apple’s retail chief Angela Ahrendts to discuss Apple’s foray into fashion and tech, but CEO Tim Cook chummed it up with Turlington Burns instead.

The supermodel-turned-nonprofit founder briefly discussed her project Every Mother Counts, an organization that works to improve women’s health in developing communities around the world—though she also talked about how she uses an Apple Watch to stay fit. A video of her running a half marathon in Tanzania to raise money for her organization was supposed to show off the capabilities of a brand new smartwatch.

This interaction was supposed to show the humanity of Apple, of what its products are capable of being a part of. Instead, it was an awkward juxtaposition: Here Apple was, highlighting the extreme need of one nation in one breath and touting a $10,000 price tag in the next.

Turlington Burns’ organization works to provide healthcare for mothers in Tanzania and other developing countries. The group helps by offering supplies for safe delivery, care both before and after delivery, medical training, and healthcare education. In Tanzania, 68 percent of people survive on less than $1.25 per day, according to Feed the Children, and the country’s gross national income is significantly less than the average for Sub-Saharan Africa.

The average person in Tanzania could save all their earnings for an entire year and just barely afford the cheapest Apple Watch. That would not include the iPhone they would need in order to use it.

The Apple Watch starts at $349, but the most expensive piece of Apple’s wrist jewelry will run between $10,000 and $17,000. There’s no doubt a number of people will be paying for the limited edition smartwatch, but the exorbitant price point caused plenty of raised eyebrows.

Sure, for high-end jewelry, it’s not that expensive. As we pointed out earlier, 18-Karat gold Rolexes can cost upwards of $90,000. But for a company that was trying to loosely tie-in global philanthropic endeavors on a national stage while hawking new gold-plated products, the marketing looked more clueless than classy.

A handful of people were quick to point out all the actual good you can do with thousands of dollars instead of purchasing yet another piece of Apple tech. Running to raise money for, or actually donating to, Every Mother Counts is certainly one way to do that.

Other worthy causes could also make due with the extra influx of cash, like Charity Water, which can fund a well in a developing community to change lives with clean water.

For the price of a high-end Apple Watch, you can fund an entire Charity Water project + transform a community. https://t.co/KZuQF5fMru

For $10,000 you can fund *dozens maybe hundreds* of public school projects. http://t.co/siIPWE36af pic.twitter.com/RkuWRwJZ2t

Actor Wil Wheaton pointed out the need to fill classrooms, too.

So what could other charities do with the money people will be spending on Apple’s high-end smartwatch?

There are plenty of worthy causes that could benefit from that money. And considering the tech industry often fancies itself philanthropists, hopefully some of the money spent on wrist bling might also make its way to people who can’t even afford a Swatch.

Apple tried to market its smartwatch in a way that might prove how it could help the world. In some ways, its products could: ResearchKit, unveiled on Monday in conjunction with the Apple Watch announcement, might help with medical research for diseases like Parkinson’s.

But the awkward pairing of the watch itself next to a supermodel philanthropist wasn’t necessarily the best way to promote the device. Turlington Burns’ nonprofit, and thousands of others around the world, really are trying to make the world a better place.

The Apple Watch is just another gadget.

Correction: The Apple Watch starts at $349.