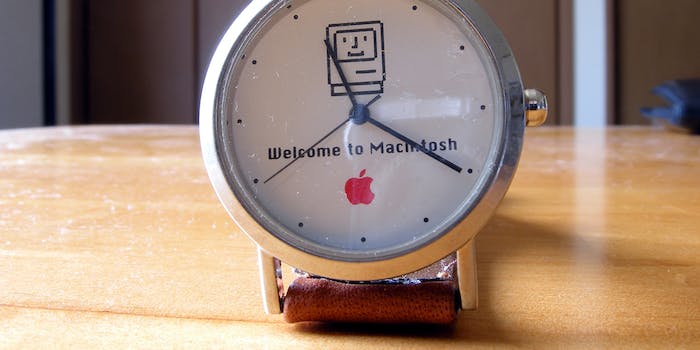 How the Apple Watch could finally make us happy

The Apple Watch signals a better future for personal tech.

The trappings of the personal technology revolution might feel indispensable now, but that doesn’t mean we like them. Does bouncing around in Facebook‘s social pinball machine make you happy? When there’s a beat in the conversation and you reach for your iPhone, is that gesture somehow in the pursuit of happiness? The answer is complicated, but worth slowing down to consider. And the Apple Watch, while imperfect by early accounts, might be part of it.

Smartphones let us do a lot of mind-blowing things, but they also suck. They makes us anxious, they pump us full of white-hot FOMO—and they siphon off our attention, which is now understood to be a fairly quantifiable, limited resource.

Personally, I can’t stand my smartphone. When I tell my friends outside of tech that I wish I had a dumbphone, they think I’m joking. But I don’t hate my iPhone (and Facebook and Twitter and email and iMessage and everything else) because I’m technology-averse—that’s clearly not the case. I just think all of those things could do a way better job of helping me, a fairly undisciplined, very digital person, be happy.

More often it feels like the opposite. I trudge into my notifications and refresh each app in a listless sort of circuit. Minutes bleed away. Hours even. Rehearsing empty digital gestures leaves me with less than I had before. My mental resources drained, I shuffle out like a zombie and console myself: At least I wasn’t bored.

Tomas Chamorro-Premuzic of the Guardian writes about the consequences of this vicious loop in what he deems the “distraction economy”:

“The result is a degradation of attention that causes ADHD-like behaviours, such as impulsivity and boredom. These symptoms are best evidenced during digital withdrawal: those 20 minutes on the tube, or the six hours of downtime while flying over an ocean.”

With most of our digital time already divvied up, commodified, and monetized, we barely know what to do with ourselves.

“A one-time theoretical physicist, Michael Goldhaber, defined the attention economy as a ‘system that revolves primarily around paying, receiving and seeking what is most intrinsically limited and not replaceable by anything else, namely the attention of other human beings’… But if attention is the new currency of the digital economy, what are consumers getting in return?”

Tech and happiness don’t mix… yet

Addiction and happiness are two very, very different phenomena, but they can look sort of similar. The former can be characterized by the alleviation of distress—subtracting a bad thing (feelings of craving, withdrawal) rather than adding a good one. I’m idly worried I received an important a text, so I pick up my phone to check for a notification and relieve the worry. In a happiness-seeking scenario, picking up my phone would be a gesture in pursuit of some kind of deeper fulfillment, one that stuck around and improved my quality of life rather than draining away milliseconds later.

Society is more technologically advanced at this moment than at any other moment in history, but on the whole we’re certainly no happier. What we are, however, is hooked.

Rehearsing empty digital gestures leaves me with less than I had before.

A 2010 review on the recent science of happiness published by Stanford suggests that technology and happiness don’t really have anything to do with one another. The advent of the computer did not directly affect happiness among Americans (notably, television didn’t either). Instead, people with sufficient wealth “are often stuck on what psychologists call a hedonic treadmill—a perpetual pursuit of material goods, which reduces the available time for personal relationships and yields minimal emotional rewards.”

That psychological process of insatiable craving, withdrawal, of pushing the stone up the hill only to have it roll back down, is a well understood phenomenon outside of tech, where we’re more inclined to call it what it is: addiction. In tech, we don’t like to use that word, even while Silicon Valley’s sea of engineers craft software and hardware vessels for exactly that. But can we make better ones? Does anyone even want to?

Addiction is pretty simple (certainly way simpler than happiness) and that makes it easier to package and sell. It should come as no surprise that the tech boom, particularly the explosion of social apps, incentivizes addiction—not happiness. We call it everything from “engagement” to “scalability,” but the end goal is simple: Get as many people using your thing as frequently as possible. Make it so fleetingly fulfilling that your users feel physical distress if they go without it. Once the novelty of a new app or gadget wears off, avoiding that mild state of distress is what drives us back to check our phone again, again, again.

In the so-called attention economy, companies have very little incentive to loan us our time back once they’ve captured it and turned it into capital. But in order to keep selling devices and ads on apps, even the most cash-glutted tech giants will need to get creative. If we’re lucky, the Apple Watch might prove to be just that mainstream consumer tech experiment.

Slumlords of the attention economy

Apple’s watch is not the first smartwatch, but it’s the first smartwatch with a shot at successfully launching a new category of device—one that we wear on our wrist, sure, but also one that lends us our own attention back. Early reviewers are bitterly divided over if the Apple Watch pulls this trick off or if it does the exact opposite.

In the former scenario, our digital tics are eased: Information is available at a glance; we gradually claw our way out of the smartphone’s attentional wormhole, data comes to us rather than the other way around. Notifications meet our eyes with a visual cue and our wrists with a “taptic” one. Less often do we cross the Rubicon of our smartphone’s lock screens into what lies beyond.

In the attention economy, tech companies are the slum landlords.

In the latter scenario, the Apple Watch adds another layer of angst and compulsion, consuming more of our time rather than less. We pay $549 and don’t even get behavioral refund.

Still, even in the latter scenario, there’s hope. Everyone who noted that notifications were making them absolutely nuts acknowledged that this issue can be tuned, software-side. The consumer can customize the threshold of “hey you need to know this right now” until Apple can nail it on the iOS-side. It’s worth noting that Google is deeply invested in cracking that code too, and Google Now—a platform nearly synonymous with its wearable software—is getting almost eerily close.

In the attention economy, tech companies are the slum landlords. To our credit as consumers, they live in perpetual fear that the next rent hike (otherwise known as the next minor-yet-must-have hardware update or hyper-addictive feature) might have us packing up our bags for greener platforms.

I say this a lot, but we shouldn’t have to go anywhere to make technology work for us. Physically reaching for and turning on a device, clambering in and out of apps to find what we want—it’s all very mentally onerous. It adds up. Bringing information toward our field of view and actually serving it to us, that’s closer to where personal technology is going. It’s inevitable and not far off: For all its flaws, Google Glass was a glimpse at that kind of future, but we saw too much too soon and retreated.

Hopefully, ideally, Apple will be able to take us by the hand and lead us back through the steps Glass skipped, getting technology out of the way of experience by literally strapping it onto us. By doing so in a familiar way, with a watch (those things have been around for ages!), Apple can bring us in closer and show us that the future doesn’t bite.

I’ve used smartwatches before, and like other devices that deliver information nearer to my field of view (Google Glass, most notably), a smartwatch makes me feel a little saner. Every moment it isn’t lit up and chirping is a little bit more peace of mind.

We deserve better devices, devices that do the work for us. Devices we don’t love/hate like carbs or cocaine or an explosive relationship or so many other things that are awesome and terrible but ultimately really bad because we’re hopelessly addicted to them. It’s time for technology to unlatch the gilded cage, for us to stumble out and remember that oh yeah, the world out here is the one we like.