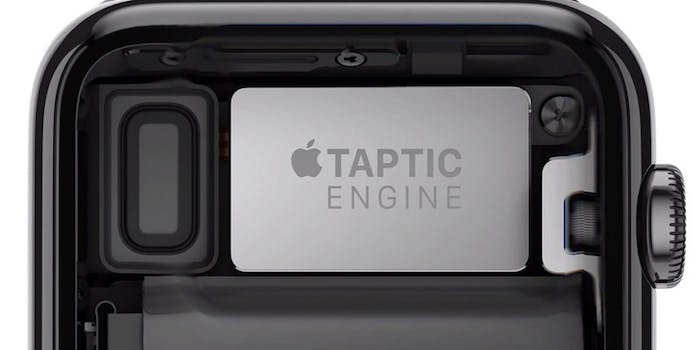 No, Apple didn’t ship a bunch of defective Apple Watches

Unfortunately, the original Wall Street Journal story, which was quite clear on the fact that the issue was discovered prior to a wide distribution of affected units, is already being lost in the static of the Internet.

Before you go cancelling your order for Apple’s first smartwatch, it’s important to grasp the facts.

Every Apple Watch has something called a “taptic engine.” Apple proprietary little vibrating motor (the name is a play on “tap” and “haptic”) provides physical feedback when you get a notification. The component is manufactured by two suppliers: Shenzen’s AAC Technologies Holdings and another company called Nidec Corp. The former supplier’s components were discovered to have long-term durability issues, breaking down as they aged.

Not wanting to ship a mass quantity of devices that were prone to failure, Apple halted the distribution of the affected units, which undoubtedly stressed the already thin supply of the watch that the company was preparing for launch. By spotting a defect in the supply chain and shifting production to its other component manufacturer, Apple did what any consumer company would do to avoid a launch fiasco.

While this does explain some of the issues affecting Apple Watch shipments, it isn’t news. In fact, we knew of the issue more than two weeks ago. Famed Apple blogger John Gruber wrote about it on April 8 after receiving a defective review unit:

The first unit I received from Apple seemingly had a hardware defect. Taps worked at first, but I found them surprisingly weak — so weak they were easy to miss, even with the watch strapped relatively snugly to my wrist. By the end of the first day, taps weren’t working at all. Apple sent me a replacement unit the next day, and it was like an altogether different experience. Without the Taptic Engine, Apple Watch is not a compelling device.

Of course, a headline like “Apple decides to only ship working products” isn’t sexy enough to pay the bills, so the wording of some coverage has been massaged to read like a consumer warning. Happily, for Apple Watch owners, the panic appears to be blown very much out of proportion.