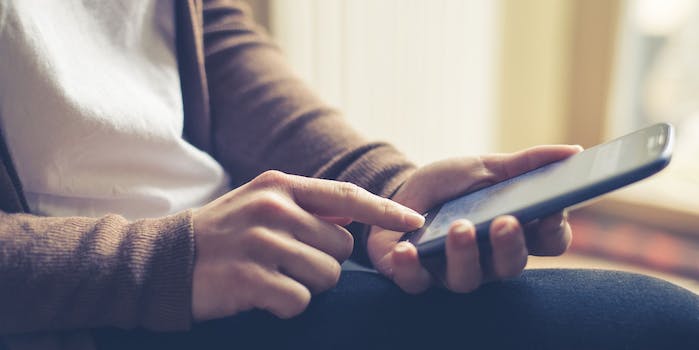 The Mood Challenge will fund proposals that use ResearchKit to study mental health.

Our mobile devices collect endless amounts of data, including everything from where we go to whom we chat with to the number of steps we take each day. Now researchers and developers are using this data to study psychological well-being thanks to ResearchKit, Apple’s open source framework for collecting and researching health data.

Apple provides two major open source tools for people to integrate health tracking into their apps: ResearchKit, geared toward scientists and clinicians, and CareKit, the framework that makes it easier for patients to track and share data. At just over a year old, ResearchKit will soon be used by GlaxoSmithKline PLC to monitor the mobility of participants with rheumatoid arthritis. It’s the first time a pharmaceutical company has used the framework for medical research.

Mobile devices can play a key role in understanding human behavior, and the Mood Challenge will fund research that investigates how iPhones and Apple Watches can provide feedback on our mental wellness. The program launched in April and announced its semi-finalists on Wednesday. Proposals include research into post-traumatic stress disorder (PTSD) and how mood and environment impacts cell aging in caregivers.

Dr. Kevin Johnson, Cornelius Vanderbilt professor and chair of Biomedical Informatics at Vanderbilt University Medical center, is a judge of the challenge, and said the program offers opportunities to explore new ways to use Apple devices and the built-in features like the gyroscope and accelerometer to make inferences about mental health.

“For example, depressed patients stay in bed. Clever researchers can demonstrate changes in activity using these tools,” Johnson said in an email. “Anxious patients move more erratically and may have altered sleep patterns. Clever developers can notify the patient about the change, and present the user with a survey using ResearchKit that helps understand the why of what the data are showing.”

“One of our hypotheses is that by having both active and passive data collection, we can understand some of the predictions and predict behavior or when mood is going to change, or when PTSD symptoms are going to kick in.”

Haddad is working on Aware Study, an effort in partnership with the The National Center for PTSD, Dissemination and Training Division, to measure PTSD symptoms and the mood of people who have been diagnosed with PTSD. The app will collect data like location, activity, and connectedness to monitor changes in symptoms.

An important goal for the project, he said, is to eventually be able to predict behavior in people who have post-traumatic stress and PTSD-related concerns. According to the VA, about eight million people have PTSD each year; that number doesn’t include others who have experienced trauma, but have not been diagnosed.

“One of our hypotheses is that by having both active and passive data collection, we can understand some of the predictions and predict behavior or when mood is going to change, or when PTSD symptoms are going to kick in,” Haddad said in an interview.

Traditionally, PTSD is measured by a clinical assessment which requires individuals to see a clinician, or a 20-item self-reported PTSD checklist screening called the PCL-5. The app could administer the PCL-5 as a baseline feature and as a follow-up to measure the changes automatically. Other features include an option to select which photos best match someone’s mood; and ways to measure avoidance, using GPS tracking to see if someone hasn’t left the house, or stopped communicating with friends, two hallmark signs of the common response to trauma.

It’s possible to access other biometric data through Apple’s Health app to measure sleep, heart rate, and physical activity, Haddad said. The app will collect information commonly recorded on paper by individuals and clinicians in a comprehensive and digital way, making it easier for patients to track and for researchers to study.

The VA has a suite of apps for PTSD and PTSD-related concerns available to the public. While Aware Study will be limited to research participants, the goal is that the learnings from the study will be incorporated into existing applications to better serve app users.

“A little bit down the line is being able to take those lessons learned and think about how we can better assess symptoms of PTSD, or post-traumatic stress in general, and how we can use technology to help address those symptoms, even for folks who will never come in and be seen by a clinician,” Dr. Beth Jaworski, Mobile Apps Program Specialist, said in an interview.

All the proposals submitted to the Mood Challenge must be open-sourced, so anyone would be able to replicate similar studies using guidelines created by Aware Study. Of the handful of ResearchKit studies underway, most are not at the stage where they can share meaningful data yet, Haddad said. Once studies have been concluded, it’s likely researchers will release the anonymized data for further research.

mPower, one of the first apps launched using the ResearchKit framework, recently released data about the 9,500 participants in its research into Parkinson’s disease, using iPhones to analyze daily changes and symptoms of people with the disease.

For Jaworski, collecting and analyzing data is one of the biggest benefits to conducting a study using ResearchKit.

“A huge thing for us is that we will be able to actually get the data,” Jaworski said. “All our apps that are public-facing, they’re all native apps and none of them transmit data. We don’t know exactly how people are using apps, what things they like and what they don’t.”

Dr. Alex Leow, associate professor of psychiatry and bioengineering at the University of Illinois, is the team leader for BiAffect, a study that uses a smartphone’s keyboard to track and predict mood episodes in bipolar disorder.

Through a keyboard volunteers will use in place of the stock keyboard on their phones, BiAffect is collecting metadata like timestamps, distances between keystrokes, and keyboard input, but not the actual content of messages.

By unobtrusively collecting data as an individual is typing on their phone, researchers can better understand if a person is experiencing a manic episode. For instance, they can tell whether someone is “self-monitoring,” or reading texts before they send them; someone in a manic episode may lose that ability to do so, and they can tell based on whether or not a person deleted words in a text before sending.

“For the technology like this, we would be able to do neuropsychological testing without ‘testing,’” she said in an interview. “This has a lot of implications, not only in psychiatric disorders and mood disorders. We believe that if we can really make this technology, it would be able to track people with other neuropsychiatric disorders such as Parkinson’s disease or other forms of neurodegenerative disorders.”

Currently, neuropsychological testing is a day-long process—sometimes multiple days—that requires patients to block out long periods of time to visit their doctors. With BiAffect, researchers and clinicians could analyze the data provided through keystrokes and the gyroscope and accelerometer on the iPhone instead of an office visit.

“This has a lot of implications, not only in psychiatric disorders and mood disorders.”

Leow and her team are conducting a pilot study on Android, and while patients in the pilot are currently still doing neuropsychological testing to see if the predictions using keyboard metadata are accurate, the goal is to eliminate any active user engagement.

Researchers are using Apple’s open source frameworks to collect data and understand human behavior on a large scale. CareKit, launched earlier this year, enables developers to implement tools for people to better track their data surrounding care, with modules to simplify sharing with clinicians or caregivers. Though you can technically integrate ResearchKit data into electronic healthcare records, Haddad said that’s not how people are using it. However, there is a bit of a feedback loop that gives participants some sense of their statistics which they can share with clinicians, and eventually, more apps and services using Apple’s frameworks may get integrated into electronic records.

The ubiquity of services that monitor our health and fitness is creating new, streamlined ways for patients to track and understand their health and treatment, from wearables that can automatically alert coaches to activity levels to apps for disordered eating that connect with doctors. As opportunities for data collection grow, so too does our trust in our devices. Beyond the biometric or geographic data, our phones may soon provide comprehensive data about our social interactions, too.

“Where people are going is really important to understand behavior, and even looking at things like call logs, how long you’re talking, how fast you’re talking, text messages, your social graph, and who are you actually engaging with are really interesting ways to understand mood and behavior,” Haddad said. “We’re using mobile not just for passive data, we’re using the sensors to collect data, but also using it to engage.”

Tiny computers in our pockets are now home to confidential health data once relegated to folders in doctor’s offices. And while people’s data is only shared with apps or researchers running CareKit and ResearchKit if they opt-in, reading the fine print on apps is going to be even more important if those apps use anonymized personal data in public research. Consider the backlash Fitbit faced five years ago when users’ sexual activity was exposed in Google search results—fitness tracking was a relatively new phenomenon, and users who didn’t understand that activity was set to public by default on the Fitbit found their personal data exposed.

Active and passive data collection through mobile devices provides a unique look at aspects of mood and mental health, and the teams in the Mood Challenge have made huge strides. With the field now narrowed down to just five semi-finalists, further judging will yield the finalists in October, with a winner announced in May 2017.