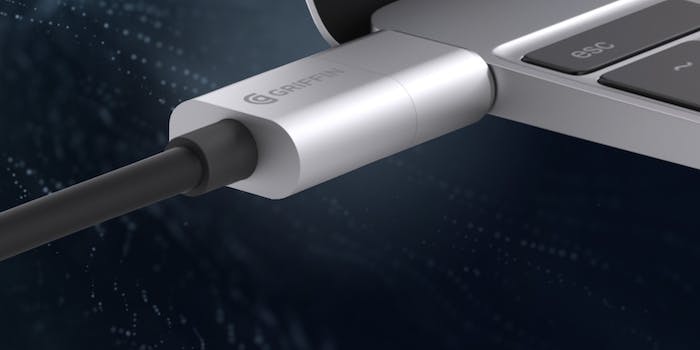 The newest MacBook finally gets a magnetic charging cable, but not from Apple

A once-standard feature has now been duplicated by a third party company.

Third-party accessory makers often focus on selling bargain-priced versions of the pricier add-ons that Apple already makes. But Griffin Technology’s new MacBook cable isn’t just a cheap alternative; it actually addresses a complaint that many longtime Apple fans have had since the debut of the latest MacBook design.

In its most recent MacBook redesign, Apple took the bold step of abandoning the MagSafe charging cable in favor of a more standard USB-C design. MagSafe, the fancy name for the magnetic cables that MacBook users have become familiar with since their 2006 debut, were largely beloved and often considered a defining feature of Apple’s notebooks. Now, thanks to Griffin, the plug has returned, albeit under a different name.

The BreakSafe Magnetic USB-C Power Cable is one of the first announcements to come out of CES 2016. As its name suggests, it’s a breakaway magnetic cable that attaches to a small USB-C adapter designed to remain in the notebook—even in the event that someone trips over the cable or the computer is dropped. In short, it works just like the MagSafe power cords of the past decade.

Apple laptop owners are so excited about Griffin’s new cable that the company’s website crashed on Monday morning following the product’s announcement.

Griffin says the cable will cost $39.99 when it launches in April, which is actually less than a USB-C cable/adapter combo direct from Apple.