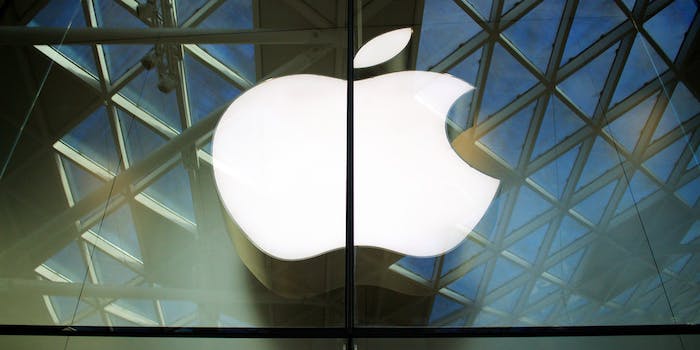 People have serious concerns about the government's position.

More Americans believe that Apple should not write custom software to help the FBI access a dead terrorist’s iPhone than believe that the company should comply with the court order directing it to do so, according to a new poll.

The latest NBC News/Wall Street Journal survey included two questions that touch on the privacy and security issues at the heart of the court battle, which began in February when the Justice Department won a court order compelling Apple to help it access the iPhone of one of the San Bernardino shooters.

Apple appealed the order on the grounds that it would set a dangerous precedent for future law-enforcement requests. Silicon Valley tech firms and privacy groups have lined up behind Apple, while several law-enforcement groups say the company should comply.

Nearly half (47 percent) of respondents to the NBC/Wall Street Journal survey said that Apple should not cooperate with the Justice Department’s demand, while 42 percent said it should cooperate.

About one in 10 respondents said that neither response captured their position, while 2 percent of people weren’t sure.

The percentage of respondents who said they worried more about the government going too far and “violat[ing] the privacy rights of average citizens”—44 percent—rose four points from December.

Privacy concerns on this question reached their peak in July 2013, a month after Edward Snowden began providing journalists with documents exposing the reach of U.S. surveillance practices. At that time, 56 percent expressed fears about government overreach and 36 percent wanted it to go further. 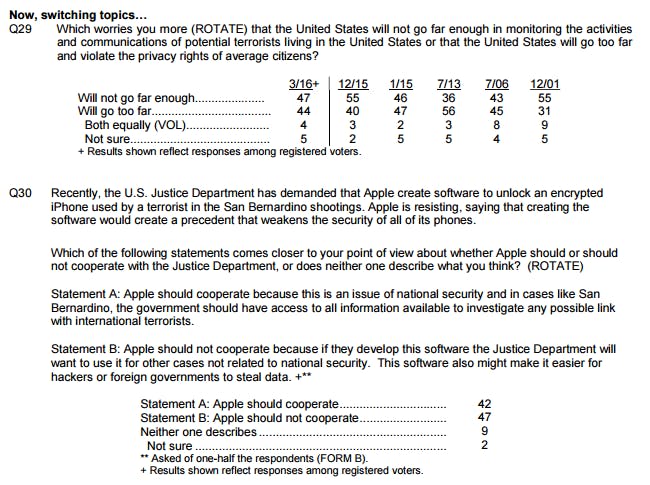 The fight over the San Bernardino iPhone is part of a much broader debate about whether tech companies should design their encryption so that they can bypass it if investigators bring them a warrant.

While law-enforcement and intelligence officials warn that terrorists are increasingly “going dark” by hiding on encrypted platforms, critics of guaranteed-access schemes in encryption warn that they weaken the security upon which innocent Americans rely. They also point out that if the United States requires so-called “backdoors” in encryption, criminals and terrorists will simply migrate to one of the many foreign products available today.

The Snowden revelations helped spark this latest phase of the long-running “crypto wars” by spurring Apple and other tech companies to bolster their products’ encryption to accommodate new privacy and security concerns. After a series of terrorist attacks in 2015, officials like FBI Director James Comey reiterated their longstanding concerns about unbreakable encryption, and the issue took on a much higher profile.

Lawmakers are considering two options to address encryption: a bill that might require backdoors and a bill creating a commission to study digital security.

Previous polls on the Apple–FBI fight have offered good news for both sides.