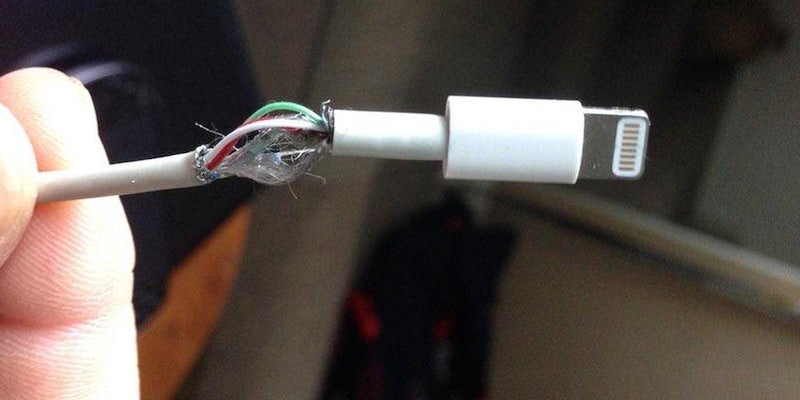 There's a major exception to Apple's reputation for quality.

The Android-vs.-iPhone war won’t end anytime soon, and while there’s no shortage of pros and cons for each platform, there’s one area where Apple‘s device is the clear loser: its absurdly fragile charging cable.

Pinpointing exactly what is wrong with the design or materials is difficult, because it seems to fail in a myriad of ways. Sometimes it bunches up near the connector, sometimes it splits open at the seams, and sometimes it just completely falls apart.

One thing is for certain—we know exactly what needs to be fixed.

how does my iphone charger still work perfectly looking like this pic.twitter.com/BjxK702tj6

This iPhone user should have used a fray fix. Don't let it happen to you !!! http://t.co/h25letDUkS #moneysaving pic.twitter.com/9GfHUo48K8

Is it a coincidence that all iPhone chargers end up wearing a turtleneck like Steve Jobs?? pic.twitter.com/RvqJpMcUWl

This is my #iphone #charger from @APPLEOFFIClAL and it sits at my office desk and its starting to fray! so mad pic.twitter.com/u0YCeKoKrR

Just wish I knew about @ChargerArmour before my iPhone charger started to fray! #preventthebent pic.twitter.com/5bKkhc0CkI

Get it together, Apple!