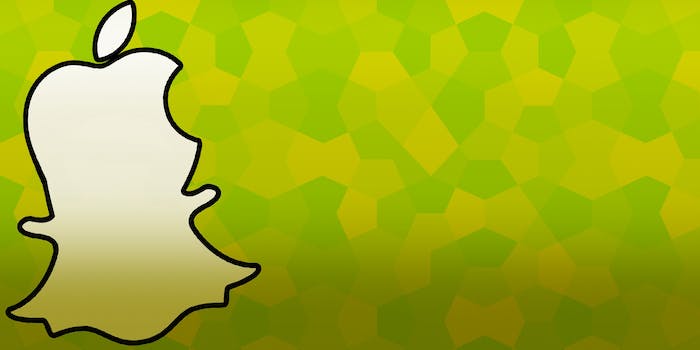 At WWDC, Apple expanded its message features… and its list of enemies.

Snapchat should watch out: Today Apple introduced a major update to its iMessage feature that will be available with iOS 8 and it takes direct aim at the media-sharing app. Apple users can now send each other self-destructing voice chats, video chats, and photos through iMessage. Users can decide whether they’re sending a message for an hour, a day, or indefinitely. Sharing selfies and other photos got quicker; as Apple’s Vice President of iPad, iPhone, and iPod Marketing Greg Joswiak demonstrated, iMessage users can send video, photo, and audio messages much more quickly than before, by holding their finger on the camera icon and then releasing it.

If you have an iPhone or iPad, this means you’ll be able to send the equivalent of a Snapchat message from within iMessage to other Apple users (after upgrading to iOS 8). This could lead to a major downturn in Snapchat use for people whose iMessage contact lists overlap with their regular Snapchat buddies, since there’s such similar functionality.

This is bad news for Snapchat. Maybe Apple was annoyed when Evan Spiegel’s controversial disappearing-photo app expanded its features to include a Facetime-esque video chatting option. Or maybe Apple just realized how many people were using Snapchat… and other media-swapping apps like WhatsApp.

The iMessage update didn’t just borrow from Snapchat. As WhatsApp’s founder Jan Koum pointed out on Twitter, the iMessage update includes several features already supported by WhatsApp, like the ability to name and leave group chats.

This update will make iMessage users happy, though Koum is right when he noted that it wasn’t exactly original. None of the new messaging features are unique to Apple. Android beat Apple to predictive text years ago, although Apple’s software will set out to distinguish the types of language we use to communicate to offer up different predictions based on whether you’re talking to your boss or your best friend, which is unusual… and perhaps one of the more innovative elements of a feature that smacks of copycatting.