Does Apple have more money than God? We did the math

Apple vs. the man upstairs.

Between the Apple Watch and the not-a-joke iCar, Apple is killing it. The publicly traded company hit a record-setting high point in an already impressive trajectory of totally epic high points, closing Monday at $133 per share. That put the Cupertino company’s market capitalization at a insane $775 billion (dipping slightly after the market opened on Tuesday).

For a little perspective, the next most valuable company, Exxon Mobil, is worth less than half of Apple’s current market capitalization (a company’s number of outstanding shares multiplied by the price of a single share). Here’s a little more perspective on what the world’s most valuable companies are worth (and how Apple blows them out of the water).

Impressive, sure. But the ultimate question remains: Does Apple have more money than God?

It’s a phrase that gets thrown around every time we talk about the company’s mind-boggling valuation, or a crazy new project it’s hemorrhaging money on. But until now, it’s only been a fun little quip.

Apple’s cash reserves alone are worth $178 billion, and it’s new record high as the most crazy-valuable company on the planet were enough to inspire us to try and answer that question.

Figuring out how much money God has tucked away isn’t easy. For the purposes of this experiment, we’ll equate God with the Catholic Church, given its position as a entity historically accumulating lavish wealth, vast property ownership, and, like, its direct rapport with the dude upstairs.

Since the Catholic Church enjoys a religious taxation status that exempts it from proper tax reporting like the rest of us infidels (at least here in the U.S., where its cash flow is considerable) this isn’t exactly straightforward.

“Legally speaking, there is no such thing as “the Catholic Church,” which is why these finances get so complicated. As far as the law is concerned, each diocese is a separate legal entity, incorporated in the states where it operates.”

The National Post similarly issued a ¯_(ツ)_/¯ after trying to calculate the wealth accumulated by the Catholic Church since 300 A.D. or so, when those Romans really started getting their act together: “… Between the church’s priceless art, land, gold, and investments across the globe, it is one of the wealthiest institutions on Earth.”

But so is Apple!

So, what can we know? Well, we can see how the Vatican shells out. The Economist did its darnedest to calculate the Catholic Church’s total U.S. spending in 2010 and came up with a whopping $170 billion. It’s indirect, but at least it’s something. That $170 billion breaks down like so: 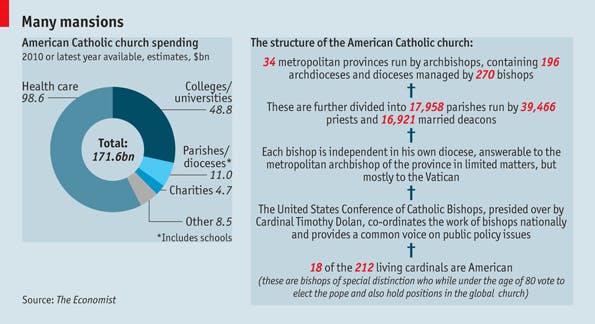 Back to Apple. In 2012, the company spent a relatively modest $1 billion on advertising. In 2012, Apple reported spending $10 billion on sales, general, and administrative costs (SG&A). In 2014, it spent $6 billion on research and development, with $18 billion in total operating expenses.

That means that Apple spent 10 percent of its net sales on total operating expenses, compared to that annual $170 billion number in U.S. spending alone the Economist came up with. Given that one of these entities is a for-profit consumer tech company and the other is a global religious organization, if we’re being uncynical, it’s conceivable that the Catholic Church wouldn’t be as interested in hoarding a massive pile of cash, instead investing in hospitals, schools, and like… church stuff.

Of course, we are cynical, so let’s talk about all the crazy secret stuff the Vatican has stashed away. For one, we know the Catholic Church owns a lot of property, both in the U.S. and abroad. According to a 2011 report by the New Statesman, the Vatican ranked as the third largest landowner on the planet, commanding a ridiculous 177 million acres. 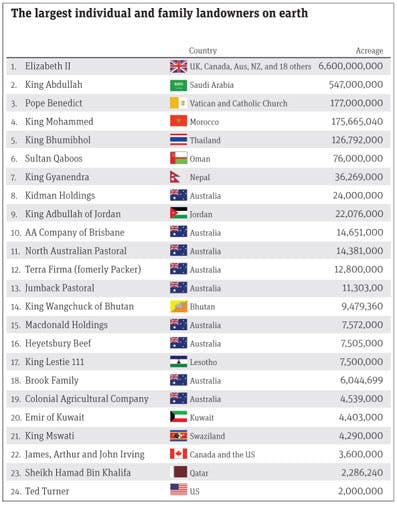 Having been around for a couple thousand years, the Vatican has also amassed all kinds of treasures, some of which are housed in the Vatican Library. The library is described as full of “historical treasures beyond compare.” 60 Minutes managed to get a glimpse of it back in 2011.

“It’s the pope’s library, but it contains much more than just church documents. There are manuscripts going back nearly 2,000 years on music and math, warfare and exploration – even cookbooks and love letters. The library is closed to the public, as it is a place for scholars only.”

Among the treasures: “A map of the world, drawn 50 years before Columbus,” a collection of love letters written to Anne Boleyn by Henry VIII, and copies of the Gospels of Luke and John, scrawled on papyrus.

Of course, this isn’t even taking the Catholic Church’s mysterious, incalculable stores of maybe-Nazi gold into consideration. And acreage aside, some of those fancy churches sure are shiny.

A 1965 story in Time estimated the Vatican’s wealth between $10 billion to $15 billion, a range that Seeking Alpha used to calculate a possible net worth of $300.5 billion were that roughly $12.5 billion to accrue interest at a fairly conservative 7 percent over the course of the last 50-ish years.

In a 2013 report by Gawker, Hamilton Nolan suggested that if the Catholic Church were to liquidate its assets, it could easily pony up $600 billion in cash: “That seems like a number that is well below the church’s total wealth.”

Which means that no, Apple does not, in fact, have more money than God.

The company is speeding toward a trillion dollar market cap, but all told, only the big guy upstairs has more money than… himself.

Photo via Unhindered by Talent/Flickr  (CC BY SA 2.0)