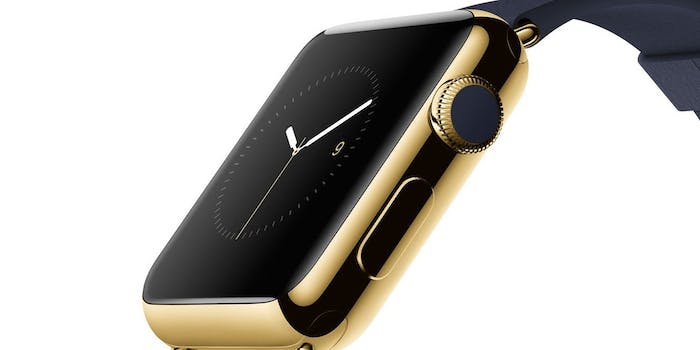 Your Apple Watch won’t be farting any time soon

Perhaps the Apple Watch was never meant to fart.

If you bought a $10,000 Apple Watch with the desire to make it fart, then you are about to be severely disappointed. The developer of the Apple Watch’s first fart app, called Fart Watch, told Cult of Mac that Apple swiftly rejected his app due to its flatulence.

An Apple employee sent back the rejection with a blunt explanation, saying, “We noticed that your Apple Watch app is primarily a fart app. We do not accept fart apps on Apple Watch.” Fair enough.

Fart Watch invited Apple Watch owners to use an iPhone as an electronic fart machine and the watch as its remote. This was apparently not what Tim Cook was describing when he emphasized the importance of connectivity between all Apple devices.

While fart apps once ran wild, Apple has taken issue with fart apps in recent years. In 2010, the company laid out new standards for the App Store that included a set agenda against flatulent apps.

“We have over 250,000 apps in the App Store,” the guide said. “We don’t need any more Fart apps. If your app doesn’t do something useful or provide some form of lasting entertainment, it may not be accepted.”

By 2012, it appeared that fart apps had wafted away as quickly as they had come. They no longer occupied any of the top ranking spots in Apple’s app marketplace.

Earlier this year, educational app My Little AlphaButts faced tough opposition to the App Store due to its reliance on whimsical, butt-based illustrations. My Little AlphaButts (created by the family of the Daily Dot’s very own Max Fleishman) was granted store approval only after the app’s creators carefully explained its educational value to an Apple employee.

Future Apple Watch fart apps may need an educational component to prove their worth, but over on Android, fart apps remain fair game.