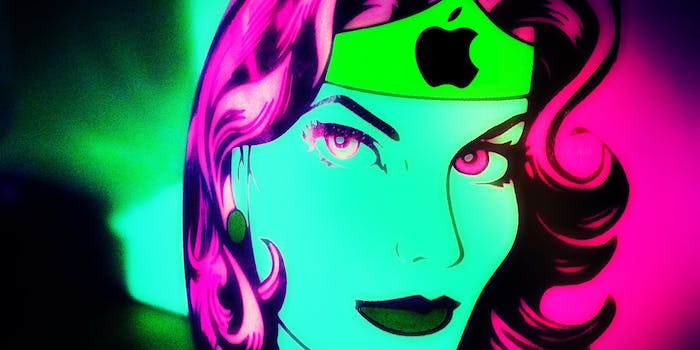 Apple catches up with reality, lets women speak at WWDC

For many observers of Apple’s Worldwide Developers Conference (WWDC) this week, news about iOS 9 or the Apple Music streaming service paled in comparison to the fact that Apple put two women (notably both white) on stage at its most high-profile event of the year.

Historically, Apple’s keynote conferences lack diversity on stage—Apple CEO Tim Cook and other male executives show off new products and services that people of all backgrounds from countries around the world use every day. Just a few female app developers had spoken at a WWDC keynote before Monday’s event, and none of them were Apple executives. The company’s workplace statistics are no more diverse, and reflect a white and male majority workforce in the U.S.

The inclusion of diversity onstage should come as a surprise to absolutely no one—many people, myself included, time and again—have called on Apple to be representative of the people that buy their products. And yet we are patting Apple on the back this week for finally recognizing reality. Despite the company’s rhetoric about diversity in tech, it took until WWDC 2015 for Apple to amplify it publicly.

Not sure if all the fuss about a woman on stage at WWDC is heartening (finally) or sad (it took how long)?

Like other tech companies, Apple provides scholarships for women and people of color who might be unable to attend the conference due to cost restrictions. On Sunday night, Cook hosted a group of scholarship recipients at a networking event before the main keynote on Monday. The focus of the event rested squarely on the importance of improving diversity in the workforce.

In an interview with Mashable, Cook in part blamed the “pipeline problem,” a term that essentially says companies aren’t totally responsible for the lack of diversity in tech because there aren’t enough people studying computer science, but he also publicly recognized the issue as one for companies to tackle. Cook told Mashable Apple is not doing enough.

That last piece of his quote is a bit ironic, considering Apple was publicly pressured into sharing diversity statistics after other tech companies illuminated their workforce data. And for the last couple years, voices of groups and individuals promoting inclusion in technology have reached a loud and powerful peak, with Apple as a main target of criticism, especially during WWDC. In 2014, shortly after it released workplace statistics, Apple updated its leadership page to include two more female executives.

Perhaps between media pressure and his own experience with diversity as a gay man, Cook is finally taking diversity efforts seriously. Hopefully these efforts will go beyond the pipeline. “[Diversity] is the future of our company,” Cook told Mashable.

For Apple, featuring female company leadership on stage is a monumental shift in how they do things. But as a number of people pointed out, there were still no people of color until Drake took the stage later in the presentation.

But, we need to see a black woman on stage.

Technology companies are finally recognizing that a diverse workforce (and, let’s be honest, diverse public image) can help build a better company. The people who use technology should be fully represented by the people who make it.

Apple still has a long way to go. However, finally letting women speak about the products and services the teams they lead are building is a great first step. As I wrote when Google featured diverse keynote speakers, I’m tired of writing the same story over and over again.

Perhaps eventually we will no longer be surprised or congratulate companies when they do something as simple yet important as inviting a person of color speak about new products on stage at a conference in front of thousands of people.

Two weeks ago, Google set the standard for diverse representation at tech conferences. At I/O, Google’s developer conference, half the speakers were women. The company kicked off the trend of releasing workplace statistics, and hopefully other companies will follow Google’s lead when they plan public appearances.

Image via Mike Lacroix/Flickr (CC BY 2.0) | Remix by Jason Reed