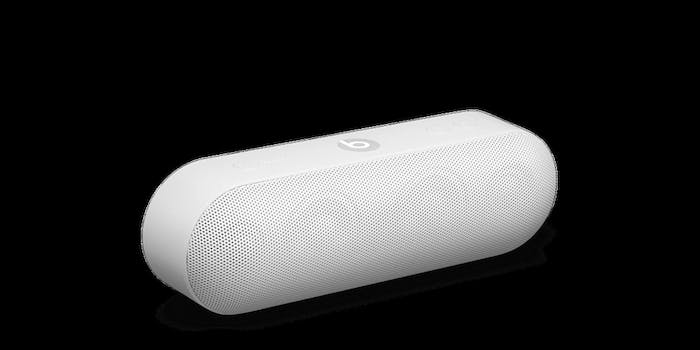 The newest Beats speaker looks like a pure Apple product

The Apple influence is starting to seep into Beats By Dre. The company best known for its headphones just unveiled a redesigned pill speaker, and it’s hard not to see the hands of Apple’s designers all over it.

The Beats Pill+ is the first speaker the company has rolled out since Apple bought it last year. While Beats is famous for its flashy headphone collection, the Pill speaker had a more plastic, kiddy-looking design—an image the company seemed to encourage with the “character” stand it sold and featured in advertisements.

The Pill+ doesn’t look completely different; it still resembles a comically large pill that you would never want prescribed to you, made even larger to justify the “+” added to the name. (Of course, Apple spells out the “Plus” on its iPhone, so Pill+ is not totally on-brand.)

This isn’t the first time Apple has remade a Beats product in its image. The Cupertino company based its streaming music service Apple Music on Beats Music; the Apple service retains some of the ideas and interface flourishes of its Beats predecessor.

The Pill+ speaker—which ditches the colorful designs of its predecessors for simple, Apple-esque black and white variants—sports four buttons for controlling playback, although a companion app can also perform those functions.

The speaker’s guts seem to have received the biggest overhaul. The device now sports a revamped two-way crossover system separating the tweeter and woofer and meant to create an improved audio experience.

Beats’ critics have repeatedly panned its products for poor sound quality in the past. It remains to be seen whether the Pill+ will change that—and if so, whether Apple’s influence has anything to do with it.

As long as it doesn’t spontaneously combust, it’ll be a huge improvement over last year’s recalled Pill XL.

Image via Beats By Dre