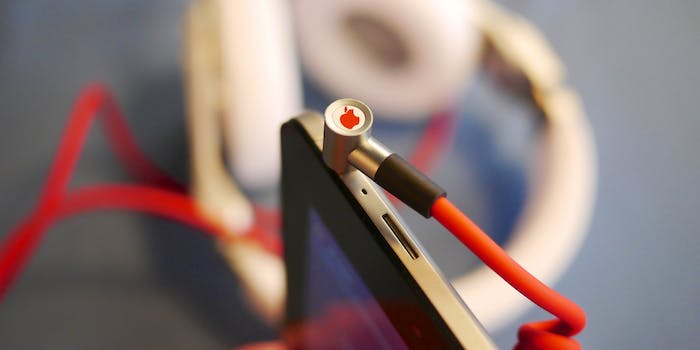 Why Apple’s Beats buy is genius

It’s been made clear by the many reports and unnamed sources from every reputed site on the Internet—and by Tyrese—that Beats Electronics will soon be acquired by Apple for around $3.2 billion. But what has not been made clear is why, and why now.

Many have questioned whether Apple has run out of ideas—but this is one of the best decisions Apple has made in years. There are three main reasons why this deal likely happened, and all three show that Apple CEO Tim Cook has a keen awareness of the position his company finds itself in and is willing to make the necessary changes to keep Apple on top.

The chairman of Interscope Geffen A&M is the golden goose in this deal. Jimmy Iovine may be the most connected man in Hollywood, with an accomplished history as a music executive and producer, who has worked with Bruce Springsteen, Lady Gaga, U2, Tom Petty, and John Lennon. Iovine has also produced films, documentaries, and TV shows, giving him rare insight into all phases of the entertainment industry. (Iovine coproduced the Academy Award–winning movie 8 Mile, starring Eminem, whom Iovine signed while CEO of Interscope.) There are few people that could successfully work in all of those fields, let alone reach the astronomical levels of success Iovine has.

Iovine’s position with Apple has not been nailed down yet. According to a report from the New York Post, Iovine will be a special adviser to Tim Cook, while BuzzFeed reports that Iovine will “revamp and run [Apple’s] whole music strategy.”

What you can count on is Jimmy Iovine being Apple’s Hollywood liaison. Iovine can get deals done that Apple executives cannot. Hollywood runs on relationships, and thanks to running one of the biggest labels in the world and producing films and TV shows, Iovine has relationships with executives across the industry. Iovine may be tasked with reinventing iTunes at first. But when it’s time to make those content deals for the long-rumored Apple TV, you can expect Iovine to be in the room.

“If Beats did anything, it got young people interested in audio again,” Jimmy Iovine said at the D conference last year. Beats did more than that—it became the iPhone of headphones, despite what any audiophile will tell you. Beats headphones may not have the best audio quality, but they have become a fashion statement, and a must-have, culturally relevant gadget, mostly thanks to cofounder Dr. Dre.

Dr.Dre—the greatest hip hop producer of all time—has helped Beats headphones attain the prime spot in the black American hierarchy of gadgets, even above the iPhone. The fact is, Apple never had cachet with black people. Android is king in Black America. Some 71 percent of Black Americans own smartphones—the highest rate of any demographic—with 73 percent of black smartphone owners eschewing Apple’s iPhone for Google, according to Nielsen. And that has little to do with the price. The collective buying power of 43 million black Americans is forecasted to reach $1.3 trillion by 2017. With Dr. Dre on board, Apple may gain the support of black Americans and a portion of their buying power—and, more importantly, their cultural influence.

Unlike other music streaming services like Spotify or Rdio, which are disliked by large swaths of artists, Beats Music was practically built by the music industry. Labels like Universal Music Group have stakes in the company. Playlists have been curated by music executives, and artists have premiered songs on the service. Nine Inch Nails frontman Trent Reznor is the chief creative officer. This isn’t a company that has problems getting along with the music industry, as Apple has at times.

While the actual licensing deals may not transfer, the people who negotiated those deals will, and they—like Iovine—have the ability to get deals done that Apple’s relationships didn’t afford them. The team at Beats Music may not have reached the number of subscribers it wanted. (Label sources called the numbers “disappointing,” according to Billboard.) But with iTunes, subscribers won’t be an issue, and the artist-friendly tactics implemented by the Beats Music team should ease the fears of those in the music industry who are weary of Apple consolidating more power.

In short, Apple’s reasoning for acquiring Beats Electronics likely goes deeper than its desire to have popular headphones. Apple could strengthen its relationships with music labels, bring in one of the best dealmakers in Hollywood, rebuild iTunes into something that is not universally hated by artists and consumers alike, and increase its cultural relevance and influence with one acquisition. For a company that is looking to expand its relationships in the entertainment industry, bringing in Jimmy Iovine, Dr. Dre, and Beats Electronics is the perfect remedy for Apple.

Photo via Janitors/Flickr (CC BY 2.0) | Remix by Fernando Alfonso III