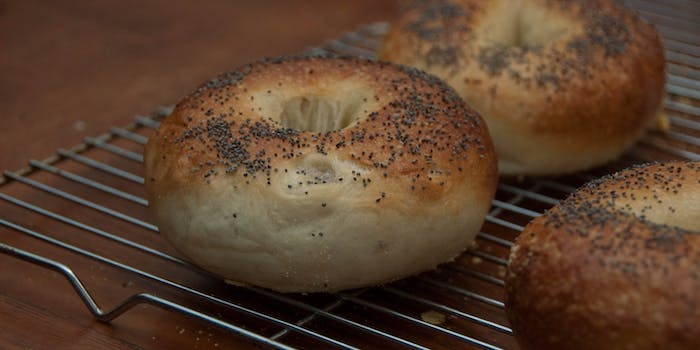 Apple fixed the bagel emoji, and New Yorkers are satisfied

Addressing one of the biggest faux pas of the decade, Apple is walking back its bagel emoji and implementing a much better, much sleeker bagel that looks like something you’d actually order from your local bodega.

Controversy first began after Apple unveiled its 70-plus emoji update in iOS 12.1. Here’s the original version.

That’s much more like it. The original bagel looked stale, cheap, and plain, the kind of sorry excuse of a meal you’d heat up in the microwave and down with a cup of instant coffee. The new emoji, on the other hand, looks so plump and delicious, we’re tempted to go out and buy a bagel from the nearby corner deli right now.

Twitter agrees that the bagel redesign is a necessary improvement.

Apple must’ve put their entire A-team on the re-redesign of the bagel emoji because now it looks photorealistic. pic.twitter.com/A6IBZjWZtF

Hi, welcome to the 21st century where we complained that a bagel emoji needed to have cream cheese on it so apple listened and changed it… Fuck this world. pic.twitter.com/DsVVSb5prO

we live in a society https://t.co/lUSmtI68ti

Others are a little picky about the plain-bagel-with-cream-cheese look. After all, the best bagel in the world is an everything bagel with a lox spread.

A nice improvement, but do people actually buy bagels without sesame seeds? Could use one more rev, imho. https://t.co/6kJty5XrYl

Okay, so I'm not a New Yorker but I don't get the bagel emoji thing. It looked fine to me. Also there is FAR too much cream cheese on it now.