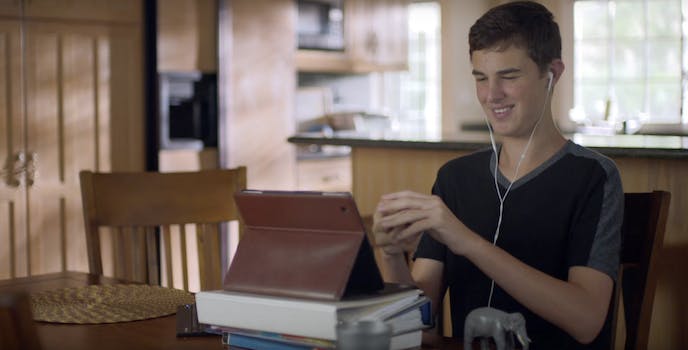 Dillan's story shows how he uses his Apple iPad.

Apple is helping to give non-verbal autistic individuals a voice. In two videos, Apple tells the story of Dillan, a young man with autism who communicates through apps on his iPad.

The company debuted two videos—”Dillan’s Path” and “Dillan’s Voice“—for Autism Acceptance Month, and Apple is featuring a number of apps, books, and podcasts on iTunes for people with autism and those who would like to learn more about this disorder.

Dillan can’t communicate verbally, so it’s hard for people to understand what’s going on inside his head and inside his heart, his mother, Tami Barmache, explains in one video. Through iPad apps, Dillan can form sentences, and the tech gives him a “voice” he doesn’t have without it. He even spoke at his middle school graduation assisted by his iPad.

The videos are heartwarming while showing some of the challenges autistic people and their loved ones face. In “Dillan’s Path,” Dillan describes the limitations of his disorder and the loneliness it can cause.

“Without a voice, people only see my autism, and not the real me,” he says. “People all need a voice not only so they can be heard, but fully understood and known.”

Apple’s move to highlight Dillan in an autism acceptance campaign is a deviation from the “awareness” campaign from Autism Speaks, a well-funded and controversial organization that lights up the world blue each April for Autism Awareness Month.

Autism Acceptance Month began as a response to the campaign back in 2011 that “promotes acceptance and celebration of autistic people as family members, friends, classmates, co-workers, and community members making valuable contributions to our world.”

Autism Acceptance Month acknowledges that every autistic person’s path is unique. For Dillan, the dedication of his loved ones, years of hard work and his iPad made a big difference in how he connects with others.

Apple has consistently been a leader in accessibility technology, with comprehensive built-in features on iOS and a number of APIs for developers to apply accessible tech to their apps. In 2015, the American Foundation for the Blind gave Apple the Helen Keller Achievement award for its “breakthroughs in accessible technology,” the only tech company to receive the award.