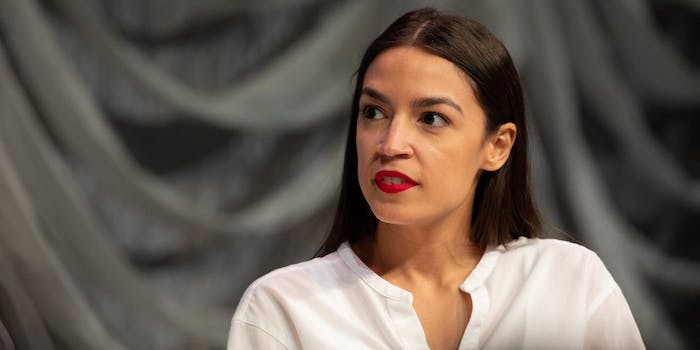 No, AOC did not say ‘It’s OK to eat pets’ if food runs scarce

People are sharing the quote as if it's real.

The quote, featured in a story, titled “Ocasio-Cortez: ‘If Food Runs Scarce, It’s Okay To Eat Pets,'” originated on the website BIZ News.

A full quote from the article purports to show the politician discussing the ongoing coronavirus pandemic before questioning the value of dogs and cats.

“Look, I don’t know why, if we’re closing everything and being all scared and piling up food and toilet paper, we should have to worry about some dumb dogs and cats too,” the quote says. “Like, last time I checked, they didn’t do anything except sit around. And if food does start running short, I mean, sorry Charlie, right? Gawd these glazed are to die for.”

The alleged statement began popping up on Facebook and Twitter this week, with users criticizing the politician for the remark.

“It’s scary to think that someone this stupid got elected,” Twitter user @lpruns said.

The quote, however, is entirely fake. No source is given for where or when the statement was allegedly made and only appears on BIZ News.

The site also has a history of attributing fictitious quotes to Democratic politicians. As noted by Snopes, BIZ News similarly crafted a fake quote for House Speaker Nancy Pelosi this month as well.