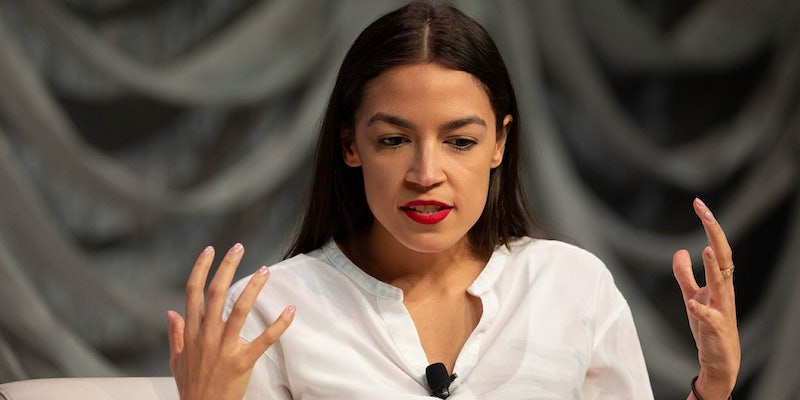 She is a lightning rod for false claims.

She’s the youngest woman ever elected to Congress and was a complete outsider with no political experience. She’s also a master at using social media to build and influence a fan base, as well as at returning barbs as often as she receives them.

As such, she’s been the focal point for more conspiracy theories in just two months in office than most rank-and-file members of Congress attract in a whole career.

Here are a few of the most prominent Alexandria Ocasio-Cortez conspiracy theories.

1) Her finances are a shambles, including a credit score of 430 and two evictions on her record.

In early February, a rumor started racing around conservative social media and blogs that Ocasio-Cortez has a history of running her finances into the ground. According to the rumors, her credit score was a shockingly low 430 (687 is the average, with a strong score being in the 800s) and that she’d been evicted from two different apartments.

Despite the fact that you can’t obtain another person’s credit history without their written permission, and that there was no publicly available evidence that any evictions had taken place, the rumor caught on, forcing the congresswoman herself to deny it on Twitter.

The right has gotten increasingly desperate w/spreading targeted rumors about me lately.

Someone made up a meme that led to @snopes disproving this: https://t.co/M5ffXwvmtT

(Also, I had to live alone in my family’s apt after my dad died, so the eviction lie is especially bad) https://t.co/gJ8NYgenSR

Before that, Snopes ran it down to a January Facebook post by a Florida security guard who also claimed, without any attribution, that Ocasio-Cortez “has had two checking accounts closed, along with two sheriff evictions.”

No such evictions have been found, nor have any “closed checking accounts” or anything else of the sort. There is no evidence to support the charge she derided as “intellectually bankrupt.”

2) Her boyfriend has a highly-paid no show job in the Congresswoman’s office.

Trump supporters might be okay with the president dolling out top-level jobs to his kids, but they were decidedly less okay with the idea of Ocasio-Cortez seemingly putting boyfriend Riley Roberts on the payroll.

That was the implication from a tweet by a conservative analytics executive claiming that she had “decided to put her boyfriend on staff—drawing a salary on the taxpayer’s dime,” all because Roberts had a staff email address.

While you were having a nice Valentine's Day, @AOC decided to put her boyfriend on staff – drawing a salary on the taxpayer's dime. Nice to see her adapting to the swamp so quickly. pic.twitter.com/bvncwzxY53

Prominent conservatives rushed to denounce the job, which hadn’t been confirmed to exist, as the height of socialism and taxpayer betrayal, or at the very least, an “ethics violation.” Once again, Ocasio-Cortez took to Twitter to offer a simple and completely plausible explanation: it was an automatic email address generated when Roberts was given access to her Google calendar, a common occurrence for congressional spouses.

None of her detractors spreading the conspiracy theory were able to figure out what the job is, or prove anything they were accusing her of. It’s since been dropped.

This tantalizing, yet somewhat incoherent, conspiracy theory was tweeted out over dozens of messages in November by comedian Jen Kirkman. The allegation: that Russian intelligence is using troll farms to pump up Ocasio-Cortez’s popularity, so that her far-left politics will further divide and inflame America.

“The troll/bot farms that cause chaos here for [Senator Bernie Sanders] support her too,” Kirkman alleged. “They anticipated regular Dem women/woke men saying “’Why are we picking on a young woman?’” Such a platform, made up of active measures that “not obvious,” will “muddy the truth” and “split the party,” exciting Vladimir Putin and causing Republicans to win.

She had none other than her own opinion and doesn’t appear to have spoken of the conspiracy since then.

Even before her election, Ocasio-Cortez was a lightning rod for hysterical conspiracy theories. One that broke in August, a few months before the election, was that she barred reporters from a town hall event with supporters in order to shelter undocumented immigrants.

“She says that 50 percent of [her] community are immigrants, but at the same time doesn’t want to let anyone in to meet who these people are,” TownHall.com contributor Katie Pavlich roared in an August Fox News appearance. “[This] signals to me that they are actually illegal immigrants and that they are harboring them, and they don’t want the press to expose that they’re here illegally.”

And it is true that Ocasio-Cortez held two town hall events that were closed to the press. The candidate’s explanation? She wanted “these people” to feel secure asking questions without feeling like they were being subsumed into the freak show that the conservative press was making out of her campaign.

The passage of a so-called “Green New Deal” has been a cornerstone of Ocasio-Cortez’s time in Congress. Supporters see it as a radical transformation of the American economy away from fossil fuels and disposable manufacturing and toward environmentally friendly infrastructure, creating both a more sustainable economy and rebalancing income inequality with higher taxes on the wealthy and high-paying industrial jobs.

There is no actual text of a Green New Deal bill, only theoretical proposals and goals, including a resolution sponsored by Ocasio-Cortez recognizing the need for such a transformation. But that hasn’t stopped the initiative from drawing conspiracy theories and allegations similar to other large-scale sustainability programs like the UN’s Agenda 21. Among the stranger ones are that it would ban eating meat and flying on airplanes.

The controversy, which has led to hysterical Republican culture war responses about burgers being ripped from our cold dead hands by socialist jackboots, has a couple of sources.

In early February, the Congresswoman’s office released an FAQ on a potential Green New Deal with a jokey remark about being “able to fully get rid of farting cows and airplanes” in ten years.

Seizing on comments by @AOC about burgers and a now-deleted reference to eliminate cows, two GOP members ate a hamburger and drank a milkshake at a press conference criticizing the Green New Deal. pic.twitter.com/j2B9QohYWn

Naturally, that kicked off a storm of faux outrage, which only was inflamed with a comment Ocasio-Cortez made about addressing the methane emissions made by cows on factory farms, saying that “maybe we shouldn’t be eating a hamburger for breakfast, lunch, and dinner.”

The inalienable right to eat meat became to conservatives what Chick-fil-A “standing up against gay marriage” was a few years ago: an inexhaustible source of outrage, fearmongering, conspiracy theories, tweets, and unfunny memes. They’re coming for your burgers, it all added up to. Gorge on them now, before it’s too late.

Lost in all the noise is that Ocasio-Cortez has a point. About five percent of American greenhouse gas emissions come from methane released from cows, and around the world, two-thirds of agricultural methane emissions emanate from the fronts and backs of cows being farmed to feed a developing world population whose higher standard of living enables them to buy more meat.

Any serious attempt to reduce carbon monoxide emissions has to look at factory farming. Which doesn’t equate to concentration camps for burger eaters, only a modest reduction in consumption.

But with her profile increasing thanks to both the Green New Deal and her role on the House Oversight Committee, Ocasio-Cortez is sure to spark more logically deficient conspiracy theories. And she is also likely to also be the first to debunk them on Twitter.