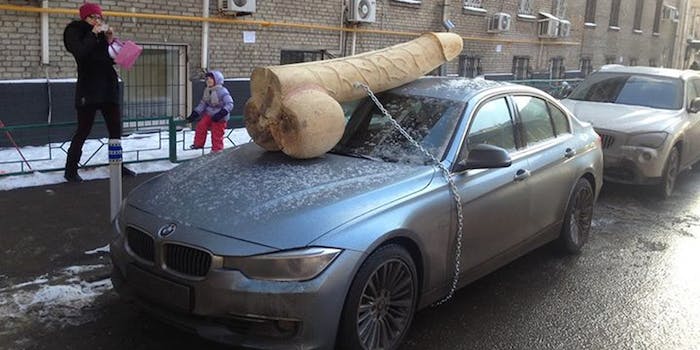 Because there's no better way than to say "I dislike with your political satire" then with a huge wooden phallus.

This is a story that involves Vladimir Putin, a Stephen Colbert-style satirist operating under a Twitter alias, and a giant wooden penis.

Since 2010, the satirical Twitter feed @KermlinRussia has gained over 700,000 followers by mocking the official Kremlin account that was first used by former president Dmitry Medvedev. @KermlinRussia’s voice is that of a childish and stupid “Persident of Ruissia,” poking fun at government corruption and incompetence, and at bland announcements made by the official Kremlin account. A typical tweet: “As punishment for missed deadlines, Putin will make Yakunin [a Russian official] buy several palaces in Sochi and live in them.”

For a long time, the two authors of @KermlinRussia remained anonymous, occasionally granting a rare interview via Skype. Then last year they decided to come out with a bang, revealing themselves in Russian GQ to be a pair of photogenic twenty-somethings named Arseny Bobrovsky and Katya Romanovskaya. Now known simply as “the Kermlins,” they are Russia’s most well-known political satirists (possibly Russia’s only well-known political satirists, when it comes to viciously lampooning Putin’s government), and enjoy a certain amount of celebrity.

As of yet, the Kermlins haven’t faced much serious retribution—until last week, when Katya Romanovskaya, fresh from a trip to France, woke up to discover that someone had chained a gigantic wooden phallus to her car. 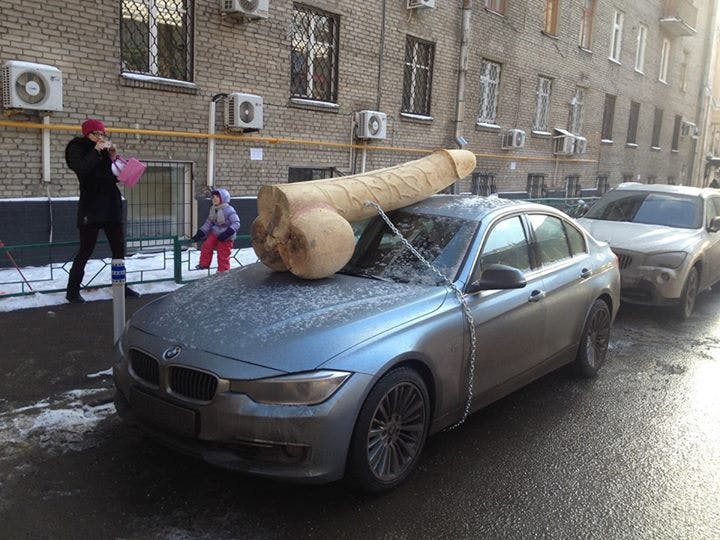 Posting a photo to Facebook, she wrote, “Finally, the day has come when my work has been noticed and appreciated.”

Speaking to the New Republic, which recently ran a cover story featuring the Kermlins, Romanovskaya indicated that her overnight gift was probably the work of Nashi, a pro-Kremlin youth group. Created in 2005 by the leader of the pro-Putin youth movement Walking Together, Nashi now has around 100,000 members and its headquarters can be found in a $32 million building in downtown Moscow, at least partially funded by the state. Nashi is often accused of intimidating Putin’s critics and of using propagandic advertising to lure skinheads to pro-Putin rallies, even inviting comparisons to the Hitler Youth.

Chaining a giant wooden penis to someone’s car may seem like a childish prank, but it also sends a message: “We know where you live.”

So what will happen with the Kermlins giant penis? Will they keep it? Sell it on Ebay? Donate it to an art museum? Luckily, a good samaritan stepped in. According to the New Republic, Romanovskaya has already been contacted by a collector who is interested in purchasing the Kermlins’ phallic problem. Yes, a cock collector. A collector of cocks. It’s probably better not to ask.