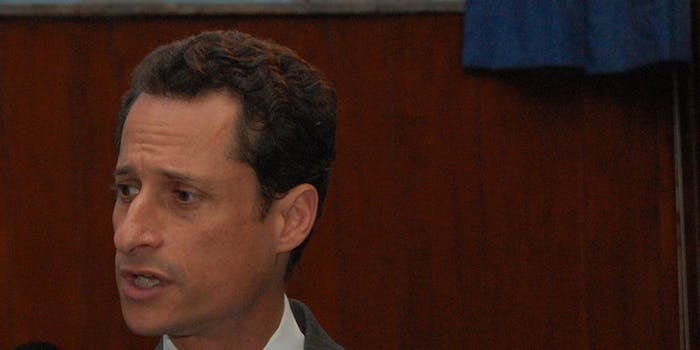 Carlos Danger may still be at large

Anthony Weiner isn't not sexting anyone right now. It's a Nixon-worthy verbal contortion.

In a verbal contortion worthy of the late President Nixon, wannabe mayor and perennial punchline Anthony Weiner has gone on the record to say, in definitive tones, that he’s done sexting, maybe, or, you know… not.

Weiner’s stirring nondenial comes to us courtesy of the New York Daily News’s Denis Hamill, who in an interview with the embattled politician (he’s dropped to fourth place in the polls ahead of the Democratic primary) had the presence of mind to ask the direct question so many journalists have failed to, but only after setting him up for the fall:

NYDN: Most so-called experts think you can’t rebound from this latest round of sexting headlines. Do you?

Anthony Weiner: I do.

AW: Because I have a sense I’m different than the other people running. I’m running a different type of campaign. I believe at that end of the day New Yorkers want to make this decision for themselves. They are more interested in ideas that affect their lives than my private life.

NYDN: There is no one you are sexting now?

AW: You can quibble about beginnings, middles, and ends, but what we’re talking about is over a year ago.

Nothing, to our minds, has ever sounded less like a simple “no,” so we can go ahead and assume this bit of Weiner’s private life—which, as he wishfully notes, none of us are even “interested in”—is still very much a thing.

But hey, these tawdry Twitter relationships don’t always have clean endings. Sometimes you’ve got to let your nude selfie-swapping friends down easy, over the course of… 12 months? I don’t know. I suppose with his uncensored dick pics already a matter of public record, he can’t really sink any lower.

Those who want to keep themselves apprised of Weiner’s digital antics, however, can rely upon this handy website: Is Weiner Sexting Anyone Right Now? It hasn’t been wrong once yet!