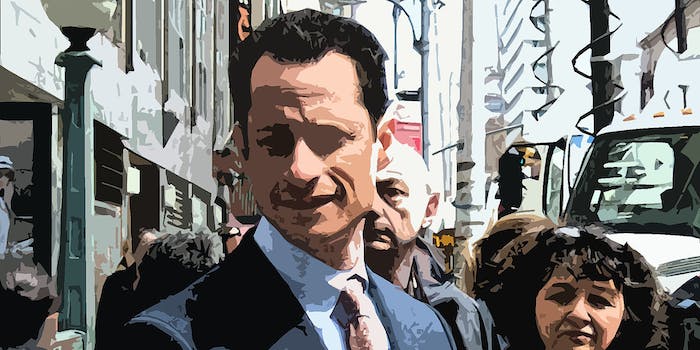 The signature look of the disgraced politician is more telling than a polygraph.

For the second time in two years, former congressman Anthony Weiner was holding a press conference to explain why he engaged in an illicit sexual relationship with another 20-something-year-old woman on social media. While Weiner, who is running for mayor of New York, may have lost a bunch of weight since falling from grace in June 2011, the look of guilt across his face was very familiar.

“The chin boss — the fleshy bump above the chin bone — is pushed upward, pulling the lips into an upside-down smile,” The New York Times blogged on June 7, 2011, following Weiner’s first scandal. “Add a downward-cast gaze, perhaps a shake of the head, and: Instant Disgraced Pol.”

The above photo montage remix is also from the very same Times story which explained how that look of guilt has plagued the political arena for decades. From President Bill Clinton making it during the Monica Lewinsky scandal to former New York attorney general Eliot Spitzer admitting to employing the services of high-class prostitutes, that look has revealed more than a polygraph test.

“As I have said in the past, these things that I did were wrong and hurtful to my wife and caused us to go through challenges in our marriage that extended past my resignation from Congress,” Weiner stated Tuesday to a room packed with reporters. “I want to again say that I am very sorry to anyone who was on the receiving end of these messages and the disruption that this has caused.”

Weiner claimed that he has finally put his sexual exploits behind him and will not be dropping out of the mayoral race despite calls for him to do so from conservatives and the Times editorial board. Chances are this isn’t the last time Weiner will have to perform a mea culpa. Maybe next time he’ll finally have his poker face under control.