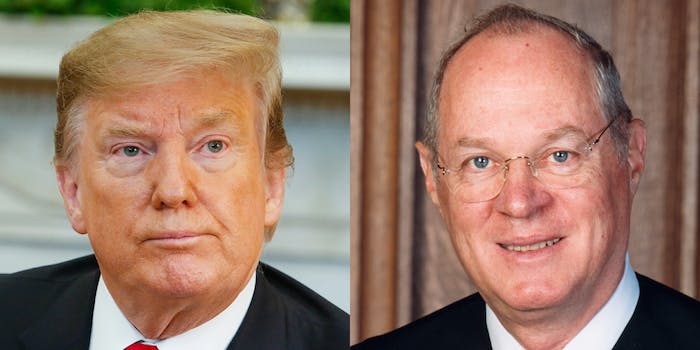 It's a nonsense conspiracy.

The nomination of Brett Kavanaugh to take Anthony Kennedy’s Supreme Court seat generated not just controversy and ugly hearings, but a whopper of a conspiracy theory: that Kennedy was forced off the court due to conflicts of interest between Trump and Kennedy’s son Justin, who was a leading figure at financial giant Deutsche Bank.

Coincidentally (or not) Deutsche Bank is the only major financial institution who would lend Trump money when his history of bankruptcy and nonpayment drove others away. He was also a friend of Trump, and the two families saw each other socially on many occasions.

The conspiracy theory surfaced in the summer of 2018, driving countless tweets, explainer pieces, and theories. Rumors even surfaced that Kennedy’s retirement came directly as a result of the threat of exposing links he had to helping Trump launder Russian money through his son, and that Kennedy had been interviewing prospective clerks—up until the moment he suddenly announced he was leaving the high court.

The lurid assault allegations against Kennedy’s replacement, Kavanaugh, pushed the conspiracy theory to the margins, but it came roaring back in the last week with revelations in the New York Times that anti-laundering staff at Deutsche Bank had flagged transactions involving Trump and his son-in-law Jared Kushner—only to have their concerns ignored by higher-ups at the bank.

It didn’t take a very stable genius to put the pieces together: Trump was laundering money through Deutsche Bank with Justin Kennedy’s help, the bank knew and did nothing about it, and when the story was about to break loose, Trump blackmailed Justin’s father off the Supreme Court so he could get his own, far more conservative pick, on the court.

The tweets putting it out to the general public are getting massive engagement.

Justin Kennedy signed off on Trump’s and Kushner’s loans at Deutsche Bank when no bank wanted to give them money. Justin‘s father is Justice Anthony Kennedy, who happened to retire abruptly from the Supreme Court to make way for Trump’s Brett Kavanaugh.

Pay attention, everything is connected.

Remember when Justice Kennedy retired suddenly from the SCOTUS w/Brett Kavanaugh waiting in the wings for @realDonaldTrump?

Guess who signed off on Trump’s suspicious loans @DeutscheBank when no other bank would?

Admittedly, this is an alarming series of connections. Trump’s financial history is still shadowy, and his tax returns are still hidden.

If it’s true that Anthony Kennedy was forced out to protect his son’s money laundering with the future president, it would be a breach of fiduciary and political trust that would almost certainly merit Trump’s impeachment–if not outright indictment.

However, this is not the same thing as a conspiracy to cover up massive money laundering by essentially blackmailing a Supreme Court judge and his son. It’s not even what’s being alleged by the New York Times piece that revealed the flagged transactions at Deutsche Bank. There are several significant ways in which the conspiracy theory is falsified, both by facts and common sense.

The first is that Anthony Kennedy’s retirement should not be surprising in any way. He announced on the last day of the Supreme Court’s summer 2018 term, but the 81-year-old justice had been the subject of a year-plus campaign by Trump to nudge him to retire in order to give the president a second Supreme Court seat in advance of the 2018 midterms.

Trump apparently even floated Kavanaugh, who had clerked for Kennedy, as a potential replacement, ensuring that his legacy would be intact.

It shouldn’t be shocking than an 81-year-old man would want to retire from a stressful job, nor that a Republican justice, appointed by a Republican (Ronald Reagan in 1987) would want a Republican president and Senate to have the final say over his replacement. And while Kennedy was interviewing prospective clerks in early 2018, he’d also been telling potential hires about his possible retirement a year before that. It wasn’t out of the blue.

But more significantly, the timeline and facts don’t match up in several critical ways.

Justin Kennedy joined Deutsche Bank’s commercial real estate in 1998, but the bank had already made one loan to Trump, a $125 million transaction to renovate 40 Wall Street. Deutsche made several other large loans to Trump over the next decade, starting a complex relationship that ended in 2009 when Trump sued the bank over a loan made to build the Trump Tower in Chicago, alleging that the 2008 financial crisis was an unforeseeable event, and that Trump shouldn’t have to repay the over $330 million he was lent.

Trump never sought another real estate loan from them, working only with the private banking arm of the financial giant after the suit—which Justin Kennedy never worked for.

While the involvement of Kennedy in the real estate loans made to Trump in the late 90s and early 2000s is unclear, it would have been impossible for him to unilaterally loan Trump huge amounts of money. The transactions weren’t illegal or unethical. They weren’t even suspicious, once you get past the idea of loaning money to a serial declarer of bankruptcy. And there was no reason for them to be disclosed during Trump’s run.

And headlines like “Anthony Kennedy’s son loaned Donald Trump $1 billion” are too simplistic to be accurate. At best, he would have been one person in a chain of people signing off on the transactions—all legal loans made long before Trump seriously entertained running for president.

Most importantly, Justice Kennedy's son stopped working at Deutsche Bank in 2009, and he never worked for the private banking unit, which deals w/ Trump's loans. The theories of impropriety there just don't add up. Let's stay focused on the facts.https://t.co/VGYsNmTBr7

Kennedy hasn’t been in a position to have any involvement with personally loaning Trump money after that, because he left Deutsche in late 2009 to start his own financial firm.

The suspicious transactions flagged by Deutsche staff in 2016 and 2017 couldn’t have had anything to do with Justin Kennedy. That also means Kennedy couldn’t have been involved in the Deutsche transactions with Paul Manafort that Robert Mueller’s office was investigating—they too took place long after Kennedy left.

Kennedy and Trump ran in the same elite New York social circles, so there’s nothing surprising about the two of them knowing each other. There’s also little surprising about Deutsche lending the Trump Organization money when other banks wouldn’t— they were trying to made inroads on American real estate, and let their standards get lax.

They’d pay dearly for this later, with massive fines totaling billions of dollars for their role in abetting Russian money laundering.

But this isn’t the same thing as Trump and Justin conspiring together to get a Supreme Court seat opened up. There’s no evidence this took place, and quite a bit of evidence that it didn’t. It might make for sharable tweets and viral traffic, but it doesn’t make for the truth.