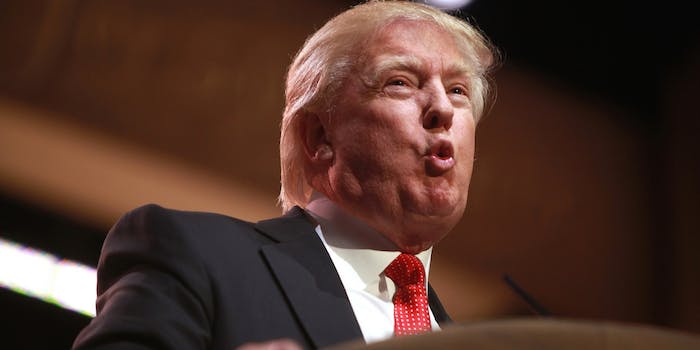 Two days after declaring “total war” on Donald Trump, Anonymous hacktivists seem to have made good on their promise.

The hacktivists also released a video to accompany the Trump data dump, as part of what they’re calling the #OpWhiteRose campaign.

“Donald Trump has set his ambitions on the White House in order to promote an agenda of fascism and xenophobia as well as the religious persecution of Muslims through totalitarian policies,” the video’s narrator says.

The video goes on to compare Trump to Hitler, coloring the New York businessman’s Republican presidential campaign as the rise of the “Fourth Reich.”

“We have attached a gift of sorts. … That might be able to insist you all in independently investigating this would-be dictator,” the narrator says in reference to Trump’s personal information. “These are provided for informational purposes only.”

In an email to the Daily Dot, Trump spokeswoman Hope Hicks said law enforcement is currently investigating cyberattacks against the Republican front-runner.

“The government and law enforcement authorities are seeking the arrest of the people responsible for attempting to illegally hack Mr. Trump’s accounts and telephone information,” Hicks said.

Despite the fanfare of the Anonymous-branded campaign, all of the data released on Thursday has been available online since at least 2014 and likely earlier.

So while Trump might want to look into changing his SSN—assuming that the SSN in the Anonymous dump is accurate—he’s likely taken whatever precautions are available to a man reportedly worth $4 billion.