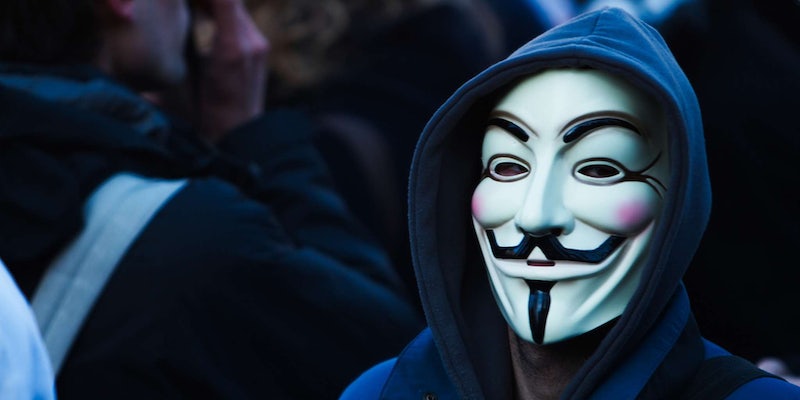 ‟REMINDER: THIS IS A PEACEFUL SHOW OF RAGE.”

Early Thursday morning, members of the online hacktavist group Anonymous posted a video on YouTube calling for anyone angry about the brutal police crackdown in Ferguson, Mo., to take to the streets of their own hometowns in they have dubbed a ?#DayOfRage”.

As you may have heard, the citizens of Ferguson and its surrounding area are currently fighting for their right to peacefully protest. … New events tonight confirm that rights are being violated. As we have seen tonight with our own eyes and through livestreaming, the police began preemptively striking the protestors with tear gas, rubber bullets and flash bangs. We’ve seen journalists assaulted and arrested, targeted by tear gas and rubber bullets, and told to turn of their cameras and move away or be subject to arrest. We witnessed police threaten demonstrators to disperse and return to their homes and subsequently firing tear gas into people’s own yards. We cannot sit still and watch this happen. It is time to get off our chairs, turn off our TVs and computers, and make ourselves heard. Let us all stand in solidarity with Mike Brown.

The group calls for a night of coordinated protests in cities around the country later Thursday, August 14, and asked protesters to wear red ribbons or arm bands to show their support.

?REMINDER: THIS IS A PEACEFUL SHOW OF RAGE,” the group added in an all-caps note at the top of the video’s description. ?WE CONDEMN ANY ACTION OF PHYSICAL VIOLENCE.”

The movement quickly picked up steam on social media, with the hashtag starting to trend in cities like New Orleans where protests are scheduled.

Anonymous, a loosely organized collective of social justice-minded hackers and online activists, has been involved the drama unfolding in Ferguson almost since the beginning. Less than 24 hours after Ferguson police fatally shot unarmed Brown, the group launched something it called ?OpFerguson”, which threatened the city’s government with cyberattacks if its police force interfered with protests. When the police cracked down on demonstrators with tear gas and rubber bullets a few hours later, the city government’s entire email system was taken offline.

OpFerguson hacktivists then moved on to attempting to lift the veil of anonymity that has surrounded the police officer who killed Brown, reportedly as the 18-year-old fled with both of his hands in the air—although police officers who were present at the scene insist Brown was shot during the struggle over a gun. Citing death threats the officer has received on social media, police officials have declined to make the officer’s name public.

Some Anonymous members decided to take matters into their own hands by threatening to release the personal information of the daughter of St. Louis County Police Department Chief Jon Belmar, whose office is handling the official investigation into the shooting. Following a substantial backlash on Twitter, the account that made the threat quickly backed down.

Shortly thereafter, other members of the group released what they claimed to be the name of the officer, which they discovered through an independent investigation. However, a St. Louis County Police Department has said the identification was inaccurate and the officer named is a member of neither its force nor the Ferguson Police Department.

In addition to the Day of Rage protests, New York-based blogger Feminista Jones has organized a National Moment of Silence vigil to commemorate the victims of police violence in Ferguson. The description in the Anonymous video linked to a Google document listing planned National Moment of Silence events as additional protest locations for Day of Rage protests.

While it seems likely the two protest initiatives will essentially coalesce, National Moment of Silence supporters voiced significant frustration that Anonymous was apparently trying to co-opt their efforts, which had been planned well in advance of any ?Day of Rage” announcement.

this fight does not belong to #Anonymous. there is no #DayOfRage. #NMOS14 is real.

you know what privilege is today? taking a well crafted peaceful thing like #NMOS14 and framing it as a #DayOfRage smh

Here’s a list of times and locations where Anonymous has identified Day of Rage protests are occurring on Thursday:

A full list of National Moment of Silence actions can be found here.