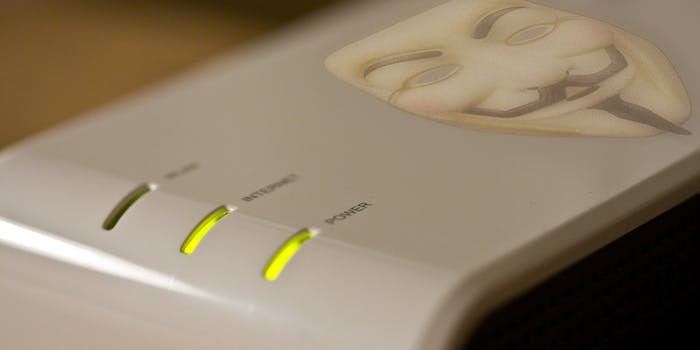 For $49, you can hide all your traffic, not just that which goes through the Tor browser.

A handful of activist developers have created what they say is the first device to anonymize all your Internet traffic through the Tor network.

No longer will Tor, the U.S. military-developed network that bounces your traffic around several other users to hide your Internet footprint, require you to use a special browser. With the anonabox, everything you do online will make that same jaunt to multiple places around the world.

As is appropriate from a small group of activists, the device is open source and open hardware, which means anyone can take a look at how it works to verify its security features perform as promised—an important feature for those worried by the fact that the National Security Agency (NSA) has a tendency to build backdoors into security tools.

Also importnat: The anonabox is small enough to fit in your pocket. As any Tor advocate will tell you, a crucial reason why the anonymizing network is necessary is to offer Internet users under censor-happy governments a way around it—look at how Tor usage skyrocketed when Turkey recently blocked Twitter and YouTube, for example. The anonabox is designed to be small enough to carry around or easily ship to someone else.

Unsure of how much funding they could expect for the project, anonbox’s creators have set up a Kickstarter for their device. Needless to say, it’s pretty successful: as of this writing, the first day of its availability, they’ve raised more than $60,000—eight times their $7,500 goal.

Update: 9am ET, Oct. 15: The creators of the anonabox have been accused of lying about the nature of their product. Some believe the developers are using a pre-manufactured Chinese circuit board rather than their own proprietary hardware. Anonabox developer August Germar has denied these accusations, saying that the anonabox team commissioned a circuit board to their specifications.

“If we could’ve bought hardware off the shelf and installed our image on it,” Germar told the Daily Dot in an email, “that would have been a lot easier, but we didn’t.”