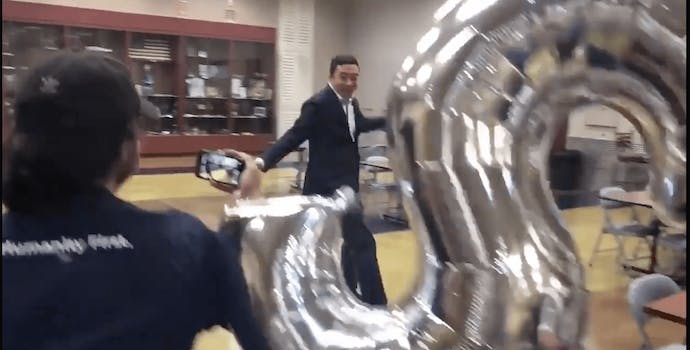 Five years from now, she turns on TV, who does she see, Andrew Yang

A video of the presidential candidate was posted last week to the Yang 2020 Reddit page that showed Yang smoothly gliding through a room on a supporter’s skateboard.

Andrew Yang can skate from YangForPresidentHQ

“See this is the difference between him and beto. This was organic as fuck. Beto was staged as shit,” user u/onizuka–sensei wrote.

User u/adidier17, who claimed the board that Yang road was theirs, said that Yang took a spin after they asked him to sign it.

Andrew Yang rode and signed my skateboard!! from YangForPresidentHQ

“This was so cool and unexpected,” u/adidier17 wrote. “I brought it up to get signed and Yang said, ‘Lemme see that thing’ next thing you know he’s cruising around the hall on my board. He signed it as well, so I guess I’ll be needing a new board, my current one now belongs in a museum.”

Of course, the video led to several users calling for a presidential skate-off.

“New debate idea: Skate off,” user u/McFlyParadox wrote. “All candidates must show off their sweetass skate park skills, and each landed move gets them microphone time – the tougher the move, the more time.”

This isn’t the first the idea of a presidential skate-off has been brought up. In April, Yang told Stereogum that he’d like to be the first “ex-goth” president, and would like to see a skate-off against himself and O’Rourke.

“I will say one thing I’d be interested in doing: Some kind of skate-off with Beto because I also skated,” Yang told Stereogum. “If Beto is open to it, I’m open to it.”

O’ Rourke received attention for his skating skills last fall, during his bid for Senate.