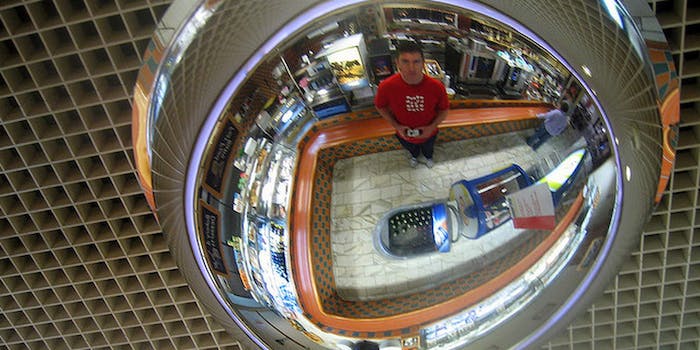 Who watches the watchers?

What’s the difference between shopping online and in a store?

Two-thirds of Americans don’t care if an online shop tracks every single thing they do. But if a brick-and-mortar store does it, nearly half of shoppers would stop visiting the store completely.

The online retail industry, which takes in hundreds of billions of dollars from Americans every year, has leeway in terms of public opinion and can watch its customers with a magnifying glass—spy, if you’re not feeling charitable. Old-fashioned stores simply don’t have that.

A new survey conducted by research firm Forrester and reported on by Quartz says Americans are unhappy that physical stores are stepping up monitoring of customers using technology like video cameras, heat sensors, facial recognition, eye-trackers, and more.

“Failing to take privacy implications into account when considering in-store data collection and use may push your customers away,” Forrester’s researchers wrote.

In other words, customers at these stores don’t want to be tracked in real life the way they are tracked online—even if many of them don’t realize how closely they’re being watched on the Internet by many of these exact same retailers.