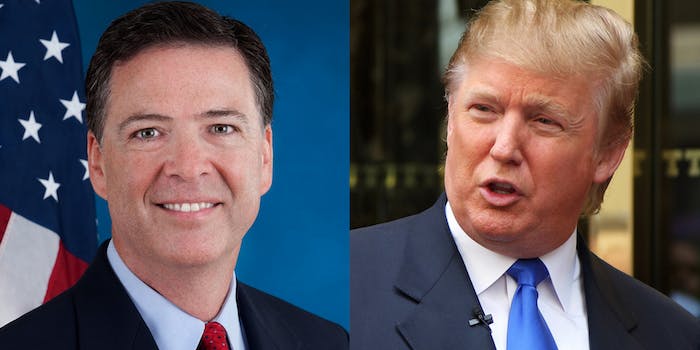 Over 60,000 back petition demanding special prosecutor for Russia probe

The petition's creator wants members of Congress to 'step up.'

An online petition demanding the appointment of a special prosecutor to take charge of an independent investigation into the Trump campaign’s ties to Russia during the 2016 presidential election has reached 63,500 signatures.

Launched by an Illinois resident Jill Moore on Tuesday, the Change.org petition protests President Donald Trump’s firing of FBI Director James Comey, who was leading the investigation into Russia’s election interference as well as connections between Trump campaign associates and Moscow.

The White House claimed that Comey was fired over conduct in a 2016 investigation into former Secretary of State and 2016 Democratic presidential nominee Hillary Clinton‘s use of a private email server for government business, although at the time Trump welcomed it. Some in Washington, however, suspect the move was designed to undermine progress in the FBI’s ongoing Russia probe.

“This action reeks of cover up and obstruction,” Moore writes on the petition page. “I am asking anyone who believes it is time for the Republicans in control of the Congress to step up and start protecting our country from Russia’s tampering and any related corruption.”

This frustration has clearly resonated with the public and, once the target of 75,000 signatures has been reached, Moore plans to deliver it to Senate Majority Leader Mitch McConnell (R-Ky.) and Senate Minority Leader Chuck Schumer (D-N.Y.).

While Trump’s critics may be enthusiastic at the prospect of a special prosecutor, a new Politico/Morning Consult poll shows that Americans are largely divided on Trump’s decision to oust Comey.

The poll found that 62 percent of Republican participants supported the president’s decision, compared to a mere 10 percent who thought Comey should have been allowed to stay on.

Democrats, on the other hand, mostly oppose the firing by a majority of majority 58 percent to 16 percent. These results, pollsters say, were not significantly moved by the suggestion that Trump should not have removed Comey while he was managing the Russia investigation.

As for opinions on who carries forward the investigation, which is at the heart of Moore’s independent petition appeal to Congress, Americans are divided.

The poll found that 22 percent of all participants believe that the future FBI director should lead the investigation. A majority of 34 percent would like a nominated special prosecutor to be appointed, with 24 percent backing “a bipartisan, independent commission created by Congress should handle the investigation.”