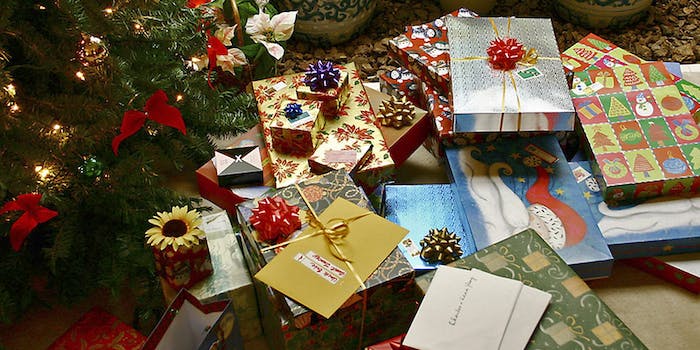 Not everyone is content to ignore Amazon's abuses to score a holiday gift.

For the past year, Amazon Anonymous has been campaigning for Amazon to pay its workers a living wage. The operation began in December 2013 with a simple petition to the online shopping giant, and as the next holiday season approaches, it is morphing into a boycott that may cost the company millions.

Christmas may be insanely profitable for Amazon, but the holiday is often a painful one for Amazon employees. The company’s fast delivery times, one of its strongest selling points to consumers, extracts a high price from its employees. Working conditions in Amazon warehouses are notoriously bad. As part of its campaign, Amazon Anonymous accuses the company of “facilitating in-work poverty by not paying its workers living wages.”

Amazon Anonymous, a U.K.-based operation, estimates that it has already cost Amazon over £1.6 million ($2.5 million), based on data collected through its website. However, the actual source for this figure is not very trustworthy. It relies on boycott participants to add their name to the Amazon Anonymous list and record how much they would have spent on Amazon during the holiday season. “We know going cold turkey is hard,” the organizers say on their website, “but we’ll provide you with support to help you shop somewhere better.”

Amazon Anonymous representative Jo Beardsmore told the Guardian, “Firstly, every penny not spent at Amazon will go to alternative shops. Secondly, Amazon have shown that they have a disregard for their own workers, and for the public’s views on their tax practices, so we’re speaking to them in a language that they can understand: their profit margin.”

Tax avoidance is one of Amazon’s most contentious issues in the U.K. and Europe. The company has arranged for its profits to be recorded through a subsidiary in Luxembourg, a well-known tax haven. Last year, Amazon paid just £4.2 million in tax on £4.3 billion in profits in the U.K. alone.

The national minimum wage in the U.K. is £6.50 for adults aged 21 and over, but the living wage is considerably higher: £9.15 ($14.33) is the amount required to afford the basic necessities of life in London, while £7.85 ($12.29) is the advised living wage throughout the rest of the U.K. According to Amazon’s careers page, temporary seasonal employees are paid a minimum of £6.70 per hour, while permanent employees start at an average wage of £7.39.

Amazon Anonymous’ £1.6 million figure, while likely inaccurate, does sound like a pretty big dent in Amazon’s holiday profits. It remains to be seen, however, whether this boycott will make a difference to Amazon’s employment policies, or if this, like so many other Amazon-related scandals, will just be absorbed by the retailer’s ever-increasing profits.