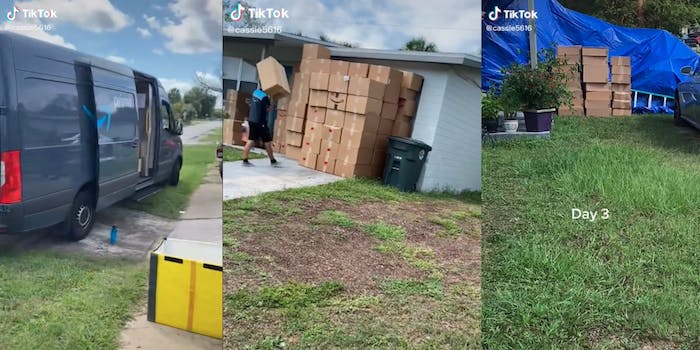 Users are demanding to know what's inside the dozens of boxes.

A massive Amazon delivery in Florida has the internet demanding answers after several videos were uploaded to TikTok over the weekend.

Footage showing two Amazon delivery vans dropping off dozens of boxes outside of an unknown person’s house piqued the internet’s interest on Saturday while racking up over 612,000 views.

“Please ask them if they are willing to be on TikTok,” user @rubyredusa begged. “I want to see what they bought!!!”

Yet the footage was only just the beginning. A second video uploaded the following day showed that a total of three Amazon delivery vans had actually shown up for the delivery.

Amazon workers can be seen unloading one of the vans and stacking boxes outside the home.

Some users speculated that the recipient could be a business owner while others suggested that the individual was actually stocking up on supplies amid the ongoing coronavirus pandemic.

Incredibly, the three Amazon vans weren’t enough. Another video showed a delivery truck from the truck rental company Penske dropping off dozens of boxes as well.

“Omg I hope you are good friends with neighbors because we all need to know why they ordered,” @dezirenicholebro added.

The alleged mother of the TikTok user who originally uploaded the footage began uploading videos of her own showing different angles of the colossal delivery.

The user, @cassie5616, suggested on Monday that the delivery has been ongoing for three days so far.

Despite the widespread attention, it doesn’t appear that either TikTok user has gotten to the bottom of the mystery.

The Daily Dot reached out to both @cassie5616 and @teaaaaaa.x to inquire about the videos but did not receive a reply by press time.