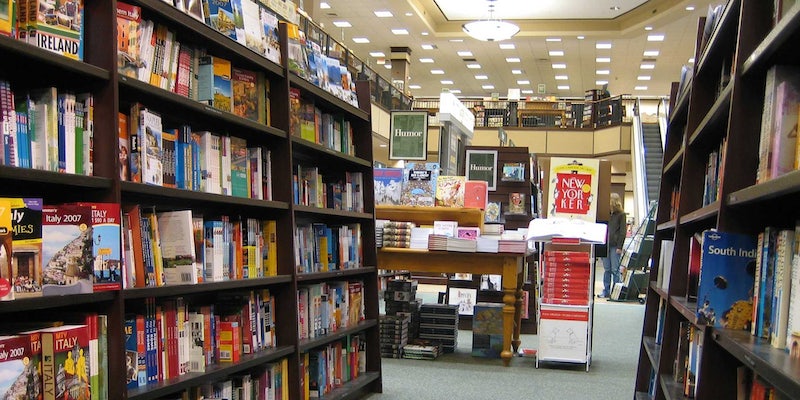 Photo via Rene Schwietzke/Flickr (CC BY 2.0)

Taking over the industry it put out of business.

Amazon killed the brick-and-mortar bookstore. Now it wants to revive it. According to a report from the Wall Street Journal, the online retail giant is planning to open hundreds of physical bookstores across the United States.

The information on the planned expansion of Amazon’s physical presence comes from Sandeep Mathrani, chief executive of General Growth Properties, a large mall operator. “You’ve got Amazon opening brick-and-mortar bookstores and their goal is to open, as I understand, 300 to 400,” Marthrani said on an earnings call for his company on Tuesday.

Late last year, Amazon opened its first—and only—book storefront. Dubbed Amazon Books, the store acts as any standard bookseller would, with a few Amazon-centric tweaks. Books face cover out rather than spine out and feature a placard that shows the star rating of the title on Amazon and customer reviews. Pricing from the store matches prices on the site’s marketplace.

There’s no confirmation of the statement made by Marthrani, so it’s hard to say just how accurate the report is. Considering Amazon’s stock took a considerable tumble after an underwhelming earnings report last week, the company may be looking to expand into other potential profit hubs—or may hold off on anything that would likely have considerable up-front costs. There’s no indication as to which category Amazon Books falls under.

The effect Amazon has had on the book retailer business over last decade has been considerable. The eCommerce behemoth is at least in part blamed for Borders closing its doors for good and the shrinking number of independent booksellers—though that trend has started to reverse in recent years.

Amazon could mitigate complaints about simply being another big-box retailer replacing the competition its killed off by making each location targeted to the interests of people in the region. The company has tons of customer analytics and data it could utilize to target its stock of paperbacks and hardcovers to the audience that the stores would attract.

Not that Amazon cares solely about selling the physical books—the brick-and-mortar location is the best way to get the Amazon Kindle in the hands of people who would otherwise never see it and get them hooked into the Amazon ecosystem.