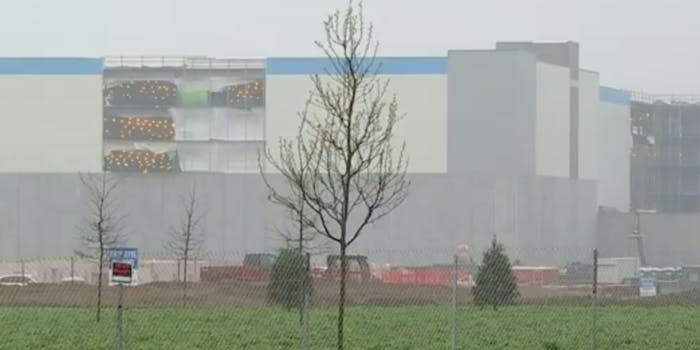 Five additional ropes—that could be interpreted as nooses—were also found.

One noose and several other hanging ropes were found inside an Amazon construction site in Connecticut.

According to Fox 61, law enforcement came to the construction site on April 27 to remove the first noose after receiving a suspicious activity complaint. A construction supervisor said a safety team documented the incident and threw the noose away.

“We don’t tolerate that,” the police captain told the news outlet. “We want to find out who did it and the motivation behind it.”

But a day later, police were called back to respond to a report of a second rope thrown around a beam. Police say this rope was not a noose.

Then on April 29, police came to the site a third time after employees found five additional ropes—that could be interpreted as nooses—at various locations on different floors in the building.

The ropes from this incident were taken as evidence, Fox 61 reports. Police said they will be tested to identify a potential suspect.

“Seven incidents we believe are connected; that’s part of our investigation,” the police captain said.

A worker described as a “whistleblower” by WFSB told the outlet that he found one of the nooses. “This was something used to kill, symbolize hate and discriminate,” he said in an exclusive interview in which his face and voice were disguised. “It brings you back to a place of uncertainty and remembrance of what ancestors went through.”

He said he feels as if the noose is a “threat to (his) life.”

While the worker says that outreach from managers and co-workers has happened and that police are now constantly patrolling the jobsite, the NAACP in Connecticut is calling on Amazon to do more.

“The NAACP strongly condemns this and every other act of hate crime and racial intimidation and harassment, and demands a full investigation into the matter leading to criminal prosecution,” the NAACP said in a statement, per Fox 61. “The noose found at the construction site sends the message of a clear threat to African Americans and those of color who are working at the site, one which cannot be ignored. We further demand that every available measure be put in place to ensure the safety of all workers at the site.”

As of Saturday morning, it’s still unclear who hung the ropes at the facility. No other evidence was found to indicate an employee might have been an intended target.

Update 2:32pm CT, May. 1: When reached for comment, Kelly Nantel, a spokesperson for Amazon told the Daily Dot in a statement: “We’re deeply disturbed by this incident. Hate, racism or discrimination have no place in our society and are certainly not tolerated in any Amazon workplace – whether it be under construction like this one, or fully operational. Amazon and RC Andersen are actively working with law enforcement as they investigate. Because this is an ongoing criminal investigation, we’re unable to comment further.”