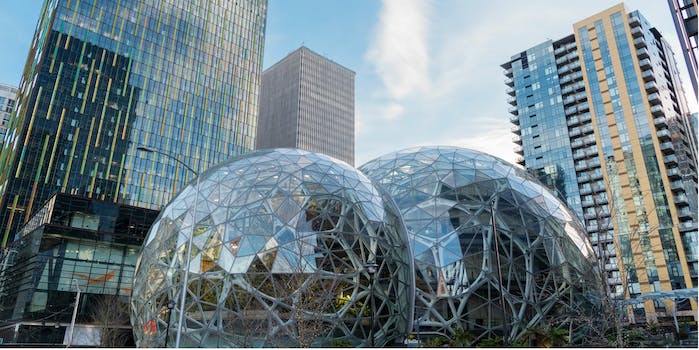 The online marketplace will announce the winner later this year.

The fight to host Amazon’s coveted second “HQ2” headquarters is entering its final rounds and now only 20 contestants remain. In an expectedly dramatic fashion, the online marketplace released its list of finalists on Thursday.

It offers few surprises. Many of the remaining candidates—including Atlanta, Austin, Boston, and Dallas—have been considered front-runners since the contest kicked off late last year. Other cities that snuck in under the radar include Columbus, Ohio; Indianapolis; Montgomery County, Maryland; and Newark, New Jersey. Los Angeles is the only city on the West Coast, confirming Amazon’s intention to distance itself from its Seattle headquarters. Mexico City dropped out, making Toronto the only remaining city outside the United States.

For the past few months, officials from hundreds of cities have desperately tried to woo Amazon, dishing out heavy incentives. Some even resorted to ridiculous press stunts, though those don’t seem to have worked. Despite its mayor giving a five-star rating to 1,000 items on Amazon, Kansas City, Missouri has dropped out of the competition. And while it was always going to be a longshot, Stonecrest, Georgia—which promised to rename itself Amazon, Georgia—also didn’t make it to the next round.

“Getting from 238 to 20 was very tough—all the proposals showed tremendous enthusiasm and creativity,” said Holly Sullivan, Amazon’s head of economic development. “Through this process, we learned about many new communities across North America that we will consider as locations for future infrastructure investment and job creation.”

Amazon didn’t offer any details on how it narrowed its list down, only that it used the criteria it announced last year: a city with more than one million people, a “stable and business-friendly environment,” and a location near downtown and less than 45 minutes from an airport, among other requirements.

As the name suggests, HQ2 will be a “full equal” to the company’s Seattle headquarters, not a satellite office. Amazon said it will invest $5 billion into the campus and hire 50,000 workers. Officials view the contest as an unprecedented opportunity to generate investment throughout their cities and attract future talent. Others, particularly current city residents, fear the headquarters will increase housing costs and lead to heavier traffic, as it did in Seattle.

Amazon said it expects to announce the winner later this year.