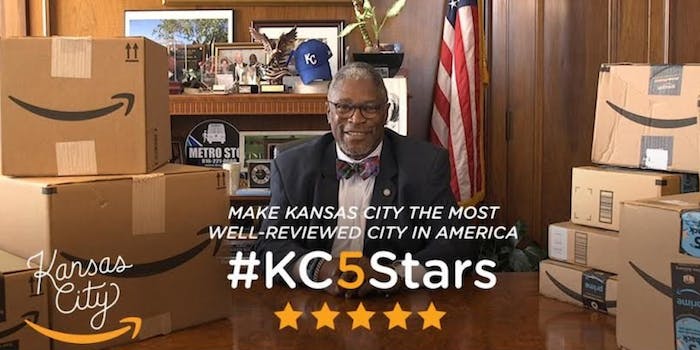 All of the products are being donated to charity.

Kansas City Mayor Sly James took an unusual approach to convince Amazon that the city is worthy of its planned second headquarters.

Yesterday, James bought 1,000 Amazon products and posted witty reviews for them on the company’s website. Each of the products was gifted a five-star rating as a thank-you to Amazon and include a meticulously crafted reference to Kansas City, Missouri. The items range from a box of Fiber One cereal to a DYMO label maker.

“I live in beautiful Kansas City where the average home price is just $122,000 dollars, so I know lux living doesn’t have to cost a ton. That’s why at $14.99, these wind chimes are music to my ears,” James wrote in one review.

Let’s all get on board with Amazon HQ2 in KC. Tell Amazon why you love KC with #KC5Stars pic.twitter.com/sJ8Cbm3Kz6

Here’s another gem for Fiber One: “We have a saying in my hometown that ‘you can never have too much Fiber.’ That’s how we keep things moving here in Kansas City, home to some of the fastest internet connections on the planet thanks to more fiber per capita than anywhere else in the U.S. Except for maybe inside this box of Fiber One, which also really keeps me moving.”

This review was written for Milk-Bone dog treats: “ALL are welcome in Kansas City. That’s why this variety box of flavorful Milkbone dog treats was the ultimate find. With very walkable and pet friendly streets, we always make sure we have a little something something for our furry four-legged friends.”

A quick look through James’ Twitter feed suggests he may not have written every review. You can read them all at this link.

In September, Amazon started a bidding war among major U.S. cities to host its second headquarters, a $5 billion dollar project that’s set to be a “full equal” to the Seattle office where it invested $38 billion over six years. If that’s not enough, Amazon will hire an additional 50,000 employees to fill what it’s calling “HQ2.”

The online retailer laid out its requirements in an open application. It’s looking for a city with a metropolitan area of more than 1 million people, a “stable and business-friendly environment,” and urban and suburban areas that attract talent. The online retailer also wants cities to offer tax credits, relocation grants, and fee reductions. Leading contenders include Dallas, New York City, Atlanta, and Boston.

Kansas City’s odds of being chosen may be a long shot, but at least it’s not going down without a fight.